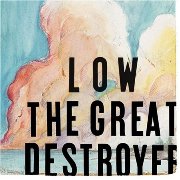 Low, to make an odd comparison, reminds me of the Harry Potter series. Wait…let me explain. Sure, they are both relatively clean, filled with magic, and big hits in the UK — but beyond the obvious there is something else – something very methodical, deliberate and perhaps a little sinister about the both of them. The first Harry Potter book, as you will recall, was a relatively simple book: short, easy to read, easy to understand, yet profound in that "purity-of-childhood" sense of wonder and hope. As each volume progressed, the stories have grown a little bigger, a little louder, a little more complex, and a little more…frightening.

While The Great Destroyer certainly shifts away from the meek and lowly station that this band has long been identified with, it is not necessarily an abrupt shift. True, this record is louder. True, this record is faster. But the essential elements remain the same: the long-winded vocal harmonies, the slow rising chord progressions and the "la-la-la's" are all still intact. But, despite the slow and steady hand that has raised Low to just-under-celebrity status, there has always been three sides to this band: the pop side, the dark side, and the just plain silly side. This record explores all three, which is why it may be the most honest Low release to date. Not that I buy into all of it. Tracks like "Everybody's Song" and "Just Stand Back" have an awkwardly conventional feel to them 151; almost as if Alan is proving to us that he can "rock out." While lines such as "It's a hit/It's got soul/Steal the show/With your rock-n-roll" have been getting a lot of press…it's simply not Low. At least, it's not the Low that I fell in love with. It's more New Order than Joy Division, if you get the drift. Then again, who am I to define them?

The truth is, if they had released a record that sounded anything like their first four, we writers would likely be bitching about that just as much. But for the love of Parley P. Pratt, don't we have enough rock music out there? And wasn't Low supposed to be our refuge from it all?

One thing glaringly obvious is that being hailed the "Kings of Slo-Core" was never a crown that rested comfortably upon their collective heads.

But this has all been foreshadowed in previous chapters, no? Recall "Dinosaur Act" from their Albini-produced Things We Lost in the Fire, or "Canada" and "The Lamb" from the darker and more troubled Tchad Blake-produced Trust. Or, for references with ever greater obscurity, consider the song they cut for the Richard Gear film "Mothman Prophesy" or Alan's violent and dirty blues/punk side band, Black Eyed Snakes. Indeed, for those who have been following along as the story unfolds, this should have come as no surprise. There has always existed a subtle degree of tension lying just beneath Sparhawk's skin. Even ten years ago when he and his wife Mimi were quietly and provocatively urging us NOT to trust violence (Long Division), there was at the same time an obvious internal conflict, a stirring within, that made itself present onstage through the subtle twitches in Alan's eye, the tense stretch of his neck, terse breathing, and the slight jerks away from the microphone. It has become increasingly apparent over the years that everyone's favorite Mormon indie-rocker has been suppressing something big and dark within. Wrestling with his demons, so to speak.

The Great Destroyer is laden heavily with images of destruction — monkey slaying, throat slitting, cutting, torture, pissing – it is just as much about deconstruction ("Your march is over. I'm on the edge… I'm waiting"), as well as discouragement ("What, pray tell, will save you now? I can't wait forever. Sometimes your voice is not enough). While on the surface this may seem like Alan is going through a crises of faith, it is in the final act that he makes it clear that hope and faith are the only things holding this together — even if it is hanging by a thin thread ("But the fire came to rest in your white velvet breast/So somehow I just know that it's safe").

If you were to ask Alan, he'd likely tell you that The Great Destroyer, with Dave Fridman (The Flaming Lips, Mercury Rev) in the production chair, has finally been the one which captured the stuff that previously existed only in his mind. And while Alan may say that this is the first record that he can actually listen to and enjoy, I'll say that this is the first Low record that I can actually listen to while driving. And it's also the first time that I haven't loved a Low record all the way through. While tracks like "California" may have earned Low a new audience and a spot on the Carson Daly show, I fear that it is isolating their long, loyal audience. You can see the effect of this "new appeal" at their live shows. The once hushed and mesmerized crowd, drinking in every lyric and gesture from the stage — people like you and me for whom the simple, elegant, and perfect beauty of songs like "Lullaby" or "Over the Ocean" changed our lives — now stand engulfed by chatty kids who think they are there to see a pop/rock band. And we're all praying that Alan is being sarcastic when he sings "With a swig like that/You better just stand back…"

Perhaps I am still stuck in the days when I used to spend late nights at Bauhaus Coffee listening to I Could Live In Hope repeatedly on my Walkman, drowning out the world around me. Perhaps I believed them when they said there were "too many words."