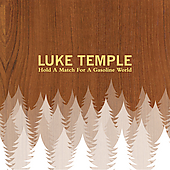 Hold a Match for a Gasoline World

In reading his bio on Mill Pond Records' website, I came to find that Luke Temple spent his first year of high school sleeping in a sleeping bag in the woods somewhere in California after his family went through a rough divorce. A very Woody Guthrie anecdote leads to a songwriter very attached to his acoustic guitar. He's very mature too, probably as mature during his second year of high school as any of us are now, and that maturity/life-experience lends itself nicely to Hold a Match for a Gasoline World which, for a first record, is remarkably complete.

I liked Luke Temple immediately. He has the bedroom-recording feel of someone with which I identify. In a realm of near-folk where depression seems to be a staple, Temple has an inch of optimism that makes me certain he will always prefer to record in a well-lit bedroom than a murky basement.

Riding a bus through New York a couple weeks ago, I listened to the track "Old New York" for the first time. Temple was singing, "Something's falling down/ Couldn't you feel that awful sound?" The sound was perfect for the moment, in a way only something so nice and fresh can be.

As much a painter as he is a singer, Temple's poetic sensibility comes through in his lyrics as I would expect form comes through in his paintings. His lyrics are simple and delicate, well-placed images/brushstrokes coming together to make one complete song/painting. Singing on "Make Right with You," a song also included on last year's EP, Temple's soft bedroom tenor echoes the melancholy we all know so well from moments of solitude and graspings for hope: "If life is a drop in the pot, I've got to make right with God/ One thing you know I must do, I've got to make right with you."

On first receiving the press kit for the record, Luke Temple's Hold a Match for a Gasoline World had a title that made me giggle. Like all new records I get, I had my first listen while serving coffee at a local café, playing it over the house sound system.

I was looking forward to another bedroom Dylan-freak, but the opening track, "Someone, Somewhere" surprised me when it opened with a sort of musicbox-like clarinet and a backbeat rhythm similar to that which I would find on "Old New York." There is a new edge and freshness to the songwriting itself, and I found that Luke Temple was not just another acoustic guitarist or singer/songwriter, for the backing vocals and pianos and keyboards which make their way into his record are not seemingly played by just random friends, or just there to make the sound "bigger" or "more like a band."

A small piano part will come in when a small piano part is necessary, vocal harmonies will come in just enough to remain interesting and surprising, and the pianos and clarinets and electric guitars will leave when they are no longer necessary, when they become predictable. This is probably best heard in the song, "Blue Britches," which lasts almost five minutes and is filled with keyboards and electric guitars and reed instruments, while never getting cluttered or over-done, nor feeling as though it could have used more guitar, or less keys, or more oboe.

But even in terms of being a young singer/songwriter, easily categorized as "someone who obviously listened to a lot of Dylan and Paul Simon and James Taylor," the actual sound of Hold a Match is nothing like that. The instrumentation centers around acoustic guitars, piano and percussion, but everything is very minimalistic, whereas, when given the opportunity for a splendored excess, the previous three artists showed no restraint. And while it may just be that Temple did not have the financial resources to include the South African choirs or get The Band to come in for some sessions, his songs exist best in the way they are presented on Hold a Match, for it's a record for coffeeshops and living rooms and headphones plugged into laptops on weekend mornings at Top Pot, not for Key Arena. Put simply, and perhaps even poorly: it is nice, in the truest sense of all that is nice.

Business was slow enough during my virginal listen at the coffeeshop that I stopped to listen to the lyrics of "Someone, Somewhere." I found that instead of the typical allusions to disenchantment and anxiety and the pressures of the real world one might expect from a solo artist armed with acoustic guitar, Temple was taking a toy store approach and refusing to acknowledge himself — and thus those of us identifying with him — as somehow glorified maturations of their former selves. He was singing things like "Someone somewhere said/ Tree have eyes and rocks have legs/ and we have monsters in our heads." Later, on the track "In the End," he sings about remembering his lost love's feet, and looking at clouds in Iceland that only "sometimes" look like angels. Nice, isn't it?