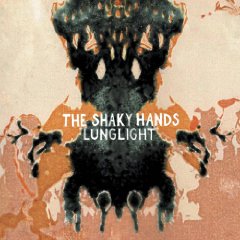 This Portland band pretty much had it in the bag by winning the Williamette Weekly "Best New Band" poll a couple years back. Their self-titled debut set them on a course previously traveled by beloved Oregon bands Talkdemonic, Copy, and the Barsuk-beholden Menomena. Nick Delf's contemporarily unspecifically cranky vocals crooned over his polyrhythmic tumbles on guitar, drummer Colin Anderson's percussive syncopation, and Jeff Lehman's scuttering electric six string layering just seemed a perfect introduction to a perfect Portland band. They were a bit pissed, a little pissed off, but showed a lot of love and hope and not so much fear and angst.

Well, this isn't the band's Pinkerton or Berlin or something near that dire, but Lunglight shows a still young group willing to get a little caustic even whilst laying down the basement party groove tunes. The good-time musical goods are still here, with "We Are Young" halfway through getting near ska guitar upsweeps and inducing flashbacks of half the bands from MTV's "The Cutting Edge" on vocal melody, while dubby horns near the end of the record are followed by a bass line lip-locked by Donovan's "Season Of The Witch."

But "World Gone Mad" convinced the casual listener that Delf is a little freaked out about growing up and eventually dying in a careless realm. Lines regarding loss of belief and loss of faith weave through Lunglight, but unlike The Shins, who lay on the anger towards the fallen for ever having believed in myths, The Shaky Hands seem once like kids who found comfort in those dreams and are not particularly pleased with having them shaken. The icy indie vibe is only there on the surface; a few repeated listens and you realize this band may resemble Seattle's bearded poets of depression in Beatles homages and Talking Heads jangle, but their hearts feel much warmer and more alive.

Like the age old question of trading security for freedom, or levels of happiness for clear truth, The Shaky Hands present that dialect from the other side. No wonder people are listening.