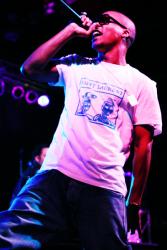 Lupe Fiasco @ the Showbox at the Market

Just before 2007 expired, the New York Times ran a story noting that hip-hop’s dominance over most other genres, in terms of record sales, could be coming to end. Its author, critic Kelefa Sanneh, noting lower record sales for most hip-hop superstars, “Because hip-hop is so intensely self-aware, and self-reflexive, it came to be known as big-money music, a genre obsessed with its own success. If we are now entering an age of diminished commercial expectations, that will inevitably change how hip-hop sounds too.” If there is anyone that would be an heir apparent to a newer vision for hip-hop, it may very well be Chicago MC Lupe Fiasco.

Fiasco, born Wasalu Muhammad Jacu, first came to the public’s attention because of a cameo on Kanye West’s 2006 album Late Registration. His own debut album Food & Liquor would follow a few months later and it would feature guest appearances by artists like Jay-Z and Jill Scott. It was generally lauded by critics and was a thoroughly impressive debut. Its first single, “Kick, Push” was about skateboarding. Other songs discuss comic book superheroes.

Before the release of his follow-up, The Cool, Fiasco told interviewers that the new album would be a concept album and follow a conceptual narrative of three characters: The Cool, The Game, and The Streets. Most reviewers were unable to follow the story line, myself included, but still concluded it was a fine album overall. It may not have redefined hip-hop… yet, but The Cool is full of great tracks that reveal an artist that is fully aware of the problems surrounding his genre and the world around him. With hook-filled songs that explore hip-hop’s difficulties like “Superstar,” “Gold Watch”, and “Dumb It Down” and politically astute songs such as “Little Weapon” and “Intruder Alert”, it is easily my favorite hip hop album of 2007, even without the consistent storyline Fiasco promised. With the decline in hip-hop record sales coinciding with the release of The Cool, it could very well be prophetic. Not every track works, “Gotta Eat” is kind of clunky as Fiasco makes himself a metaphorical and literal cheeseburger, for example. But even when he misfires, his willingness to swing for the fences overshadows the occasional uninspired song.

Last Friday he brought his tour to the Showbox at the Market and played to a sold-out crowd. When it was all over with, Lupe Fiasco’s set was two hours long. I finally was inside the Showbox after slowly making my way through a line that stretched around the block and was not too far away from circling the entire block. 45 minutes before the show was to begin, the floor was entirely packed. I knew it would be next to impossible to take any photos regardless of where I stood.

It was not a perfect set. Fiasco’s sideman finished many of his lines but rhymed over him. That would not have been an issue if his delivery was as smooth and seamless as Fiasco’s. Instead, it came across as rough and jerky. This has been a problem in the past, and still continues to be. Fiasco also tried again to find a common narrative through the first half of his set by telling a story of meeting someone for the first time. Between songs he’d pick up where his tale left of by beginning each story with “remember when” and followed with a couple of sentences before launching in to the next rhyme. He tried to give his performance the feel of a Robert Altman film, with a common thread holding story together, but it didn’t allow for any real interaction with the crowd or provide any insight into what each song was about or was inspired by. It also meant that he could be playing the exact same set list every night of his tour.

There was still quite a bit to admire, though. Matthew Santos, a pop/folk rock singer who sings many of the hooks on Fiasco’s first two albums was along for the tour and sang most of his parts. He plays the role that Fiasco’s mentor Kanye West enlisted Maroon 5’s Adam Levine for – to sing the softer, R&B parts in the choruses of the poppier songs. Santos, like Levine, plays his part very well and is a very good singer. His smooth delivery fits nicely against Fiasco’s rhymes. Having him on stage brought a life to those songs that would have been lacking if his hooks were sampled by a DJ or sung by someone else.

The crowd also seemed to propel Fiasco. They sang along to many of the songs throughout the entire set, where it was possible, like finishing each line in the chorus to “Gold Watch”. I thought the performance got progressively better, as well. He closed with, in order, “Dumb It Down”, “Little Weapon”, “Paris, Tokyo”, “Gold Watch” and “Superstar”. Those five songs all come from The Cool, and are my favorite tracks on that album. When it was time to play “Superstar”, the first single off of the new album, Fiasco said that when he wrote it he dreamed of playing it to a packed house. It got the crowd fired up again and the song, especially Santos’ hooks, filled up every available inch of the Showbox.

Despite the few issues I mentioned, this show was the first great show of 2008. Fiasco is a performer and artist who respects his audience’s intelligence rather than panders to its ignorance. His rhymes are accessible and challenging. He has said that his third album, titled LupEND, will be his final one. I don’t believe it (Jay-Z “retired” after The Black Album but still made American Gangster last year; does anyone think that 50 Cent will abide by his promised retirement and not record another album?). Or maybe it’s just that I don’t want to. I don’t know if Lupe Fiasco will change the face (and sound) of hip-hop but he’s getting closer than anyone else right now.