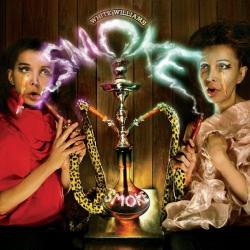 There is a lot to be said for taking things easy, to stay relaxed and to not let things get to you. This is especially true if you have a lot of eggs in your basket, and Joe Williams, the man behind White Williams, has eggs a plenty. Not only is he a singer, musician and graphic artist, but also he’s been busy touring with the likes of Girl Talk. Smoke, the debut album from White Williams is pretty much what you might expect when you look at the garish cover of the disc, the sort of music that you might expect to be playing when you a little bit off your head after inhaling a little smoke – whatever smoke that might be.

If anything can be said for Smoke is that its relaxed to the point of sleepiness. White Williams seems to thrive in that zone of lurid disco-funk and glam-rock that is an extension Ziggy Stardust-era David Bowie. This is readily apparent from the opening track “Headlines,” a song that could feel very comfortable on the soundtrack to Velvet Goldmine, taking glam rock and blending it effortlessly with a slow R&B jam. This formula is repeated with varying results, like “In the Club” that sounds like an extremely forced Bowie homage (and remarkably similar to be much smoother “Headlines”) or “Danger,” which is a little more Gary Numan than Bowie, but still in that same arena. White Williams break away a bit on “Going Down,” a track that comes across more like a subdued revision of !!!, lacking the frenetic pacing of the !!! and replacing it was a mellow rhythm that works surprisingly well. There are some rather odd turns, like the cover of Bow Wow Wow’s “I Want Candy” that is turned into something like might here in a low budget porn flick rather than pop radio, becoming more like trance-rock, putting the song on a heavy dose of Quaaludes – effectively removing the infectious energy of the ‘80s original. However, White Williams does win back some points with “Route to Palm,” a real charmer that is catchy and energetic without being chaotic, almost as if he wanted to write a indie-pop classic rather than stick with the glam rock formula.

Smoke is an album chock full ‘o smooth grooves that are locked into the ‘70s and ‘80s new wave and glam rock dimension. This kind of leads to a overall tone to the album that doesn’t waver too much from its goal, yet at times feels a little forced and repetitive. However, through it all, you can hear many good things in the White Williams sound, especially when he lets it vary from his obvious influences.