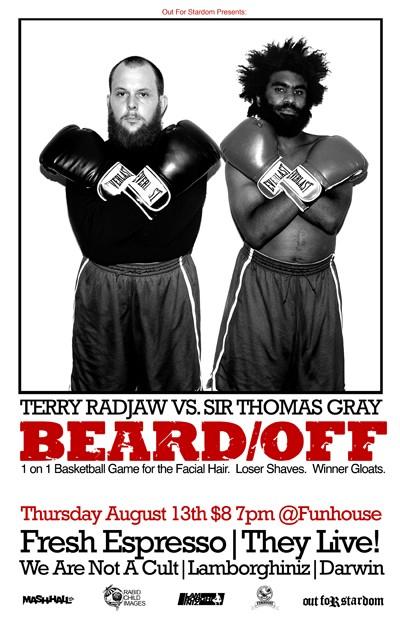 I’ve written enough about beards and Seattle that a) a friend recently asked me if I feel the urge to shave more often than most people, lest I be seen with a five o’ clock shadow and b) a special category on TIG was created called “Beard Alert”.

Having said that, there is a bazillion good reasons for recommending this Beard/Off tonight at the Funhouse. That it is one event that is guaranteed to reduce Seattle’s beard population is but one of many. This event begins with a 1-on-1 basketball match between Champagne Champagne’s Sir Thomas Gray and Mad Rad’s Terry Radjaw. The contest is simple and is spelled out on the poster: “Loser shaves; winner gloats”.

I don’t have a dog in this race as I like both Champagne Champagne and Mad Rad equally (ie, a lot) but it gets even better as following the game there will be performances by some of the best local hip hop acts, including They Live and Fresh Espresso (which features Radjaw’s Mad Rad bandmate P. Smoov).

It’s $8 and begins at 7pm, 21+. I really hope this takes off and becomes so successful that the next Beard/Off pits Tim Harrington of Les Savy Fav against Iron & Wine’s Sam Beam.

Here’s the video to They Live’s “My Weed” (and one more video that features no performers from this event but one that I couldn’t resist including):