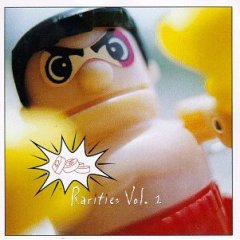 the sleepwalker December 10, 2007 no Comments

In 1994, David Geffen and cohorts dug some gems (or at least some shiny rocks) out of their collective trash bins to piece together a powerhouse compilation spanning across some of the label’s alt-rock giants including: Nirvana, Weezer, Sonic Youth, and Counting Crows. The leadoff track on this 14-song budget trash sampler was none other than Glasgow’s Teenage Fanclub.

I even dug out the liner notes from my dusty CD pile to precisely relay the printed story that the song “Mad Dog 20/20” was banned from inclusion on 1993’s Thirteen because of the use of the word “fizzin’.” Allegedly, such language is banned in Scotland under the “Good Lyric Act of 1973.” I imagine this may be a smirky euphemism for “our song has terrible lyrics” so we decided not to include it on the record, but one should feel free to interpret the legend in any way desired.

Poetic or not, the brief 2:38 song rides a gentle California surf like a mopier, less precisely harmonic Beach Boys deep cut as it explores the ennui of youth and the substitution of budget potables for human contact and adventure. Although not a bad listen, it is definitely an off-track for the Big-Star enamored band.

I was first knocked over by Teenage Fanclub when I saw the video for “The Concept” (from Thirteen’s predecessor Bandwagonesque) on 120 Minutes one late night in 1991. While Teenage Fanclub may be, to most, a footnote in alternative-rock history, the selection of Bandwagonesque as SPIN Magazine’s album of the year in 1991 (surpassing Nirvana’s Nevermind, My Bloody Valentine’s Loveless, and REM’s Out of Time), in the same year that Rolling Stone gave the album a 2/5 rating, gave a clear indication of an impending industry radar split.