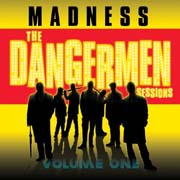 On September 24th at the Fenix Underground most of us ska-loving Seattleites will be able to experience the original line-up of the most giddy and good-natured second wave Two Tone band for the first time. Madness will descend upon the venue with all the initial members, including "Suggs," "Chas Smash," "Kix," "Monsieur Barso," "Bedders," "Woody," and "Chrissy Boy."

The seven Brits had kept in shape over the years throwing "Madstock" gigs until last year when they snuck into Camden's Dublin Castle to perform under the alias that would give this come-back album its title.

They selected lesser known ska songs to cover, and a helping of the oddities are lovingly recreated here, from Lord Tanamo's study of incest "Shame & Scandal" and little people-baiting "Taller Than You Are" (the inspiration for Randy Newman's "Short People"?), Max Romeo's fiercely religious and violent "Iron Shirt," and Rudy Mills' brawling vengeance tune "John Jones." The album's sequence has some non-ska surprises though, like a wonderful version of the Kinks' drag queen devotional "Lola," Jose Feliciano's "Rain," and a pumped-up soulful take back of "Keep Me Holding On" from Kim Wilde.

A powerful version of the Barbara Lynn classic "A Good Thing" more than makes up for a somewhat lackluster and unnecessary take on the leave-it-to-its-creator "Israelites" (has anyone but Desmond Dekker ever performed it with the sheer mystical sound of cool he wrote it into being?).

Madness was always known as great storytellers; that was their distinction among the Specials and Selecter and the Beat and the others, from their American hit "Our House" to "Lovestruck." So it's a bit odd they'd come back with a covers record — songwriting being a primary strength. But they picked songs that are great stories — these are songs that not only sound like soundtracks to movies, that sound like movies. I expect there to be even more surprises in what they play at their show in Pioneer Square next week, and only wish I had a camera to film it.