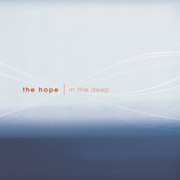 The Hope is fronted by Shelby Earl and Katie Freeze, who were focal points of the band Ravenna, and the band will be playing the release show for this CD on September 22nd at the High Dive with two of our better recent local musical acts, Tim Seely and Slender Means. Casey Wescott of Seldom and the Vogue backs them up live when the women perform.

In The Deep actually release two days before on September 20, and will be made available at our beloved local Sonic Boom stores, as well as on the Hope's website. It was captured in the studio by a locally revered producer as well, Martin Feveyear, who has worked with everyone from The Divorce to Rosie Thomas to Mark Lanagan. It was recorded in the spring of 2005 at Jupiter Studios — yes, in Seattle. Screaming Trees' Mark Pickerel plays on the debut, and Mike Notter of Shim and Ryan Davis of Mortimer, both bands The Hope has played out with.

Shelby Earl is an accomplished and talented vocalist and musical theater performer, growing up in Olympia and Los Angeles. The bio says her "vocal style hints at influences such as Ella Fitzgerald, Tori Amos, Bjork, and Kate Bush." Katie Freeze, who also sings but also plays piano dominantly on the record, is from Boston and lists "Debussy, Part, Britten, (and) Sondheim" as inspirations.

The centerpiece of the album is the spiritual "Summer," a deeply affecting song about jealousy and forgiveness which probably should have been placed sooner in the sequence. Thoughtout the release, voice, piano, and strings crescendo, all reaching the same dramatic moment of revelation. As the haunted flow of the ballads — and this is pretty much a solid album of ballads — grow around and over you like some sort of wintry kudzu, the pricks from the thorns in the lyrics can barely be felt by the overwhelming lovely outpouring of it all.