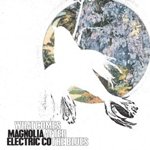 What Comes After the Blues

What Comes After the Blues may be the best album Neil Young never recorded. Jason Molina retired the Songs: Ohia name in an attempt to lose the one-man-band aesthetic and assemble a living, breathing group. Magnolia Electric Co. draws on American roots with the dirt still clinging on, honed sharp by Steve Albini's patented polished-rough production. Molina's songs (and despite the 'band effort' protestations, all the songs save one are his) are the equivalent of an amusement park Olde-Tyme photo booth: sepia-tinged yet immediate.

The album is chock full of forlorn elegies, but opener "The Dark Don’t Hide It" is a monster, opening with the sort of crunchy riff that seems ready-made for Crazy Horse-style endless guitar freakouts. Mike Brenner's steel guitar draws out the mournfulness in Molina's somnolent drone, while Jennie Benfor's backing vox add a dash of melancholy sweetness to the mix. Which gives the necessary lift to Molina’s witty sourness: "The world was empty on the day when they made it / and heaven needed some place to throw all the shit." The chorus has that perfect mix of rock power, country twang, and pop infectiousness that always got Uncle Tupelo songs stuck in your head, and the effect here is much the same.

The only song not penned by Molina, "The Night Shift Lullaby," was contributed by Benford of Jim and Jennie and the Pinetops, who sings background throughout the album. She takes over the lead for this one, and her earthy warble makes the track sound as much hippie protest tune as bedtime story.

"Leave the City" wouldn't feel out of place on a Calexico album, thaks to the addition of Michael Kapinus’ trumpet. Kapinus' versatility may make him the VIP of the record, switching over to Wurlitzer on the dirge-like "Hard to Love a Man," bolstered by the sincere longing of Dan Macadam’s violin. The melody showcases Molina’s introverted mumble at its heartbroken best.

Where were the rest of my songs tonight? asks Molina, alone with an acoustic guitar at the opening of Northstar Blues. Gradually the rest of the band joins in, but the singer is still isolated, wondering why the only song he can remember is the one he wants to forget. But neither this song nor any of the others on What Comes After the Blues is forgettable. And while one name is given the songwriting credit, the contributions of the band, the longest-running group Molina has been able to keep together, cannot be discounted. If it takes a name change to get people to recognize that, so be it.