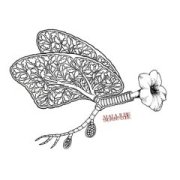 "Merci de m'avoir rapporte ma culotte," she says as they sit on the table, a birthday cake between them. A Malajube song plays in the background, possibly. I'll explain later.

During the first few listens of Malajube's Trompe L'Oeil, many say they hear the Arcade Fire. I definitely hear many disparate influences, but I wouldn't say Arcade Fire, even though Malajube comes out of the same Montreal music scene. I'd say John Hughes. Yeah, that John Hughes.

The first track of the album, titled "Jus de Canneberges," is a 58-second ode to George Harrison's guitar stylings on later Beatles tracks. The album takes a turn on the next track "Montreal," quickly turning into nice, toe-tapping indie-pop (I hate to use the term "indie pop" to describe music, but unlike the Arcade Fire, Malajube is, well, more poppy).

The melodies and guitars give a slight feel of early-eighties New Wave (the kind John Hughes would use in his movies), with just a touch of Southern California mall punk. But don't let that dissuade you from this band, because unlike many of the bands who actually come out of the So Cal scene, Malajube actually do it right, using the guitar and drums to put an exclamation point on their thick vocal melodies.

If the song titles didn't give it away, every lyric on this album is in French. While some people may be annoyed to listen to lyrics they can't decipher, it's amusing the way lead singer Julien Mineau structures his vowels and consonants, because you can almost make out English words, which makes this album even more interesting to listen to. While the lyrics sound pretty in French, you're free to make up your own English lyrics to go along with them, such as in "Pate Filo" (Is that a liver spread on thin dough?) where I like to imagine I hear Mineau sing, "She might be a little dumb."

The one comparison that can be made about Malajube to the Arcade Fire is the instrumentation, which is solid. It's apparent the members of Malajube (Mineau on vocals and guitar, Francis Mineau on drums, Thomas Augustin on keyboards and vocals, Mathieu Cournoyer on bass, and Renaud Bastien on guitar and keyboards) have been playing together for quite a while, and have been playing music apart for even longer. They contruct epic, complex indie-pop songs, a perfect blend of the dramatics of the drums and harmonies without having to sit through eleven minutes of mostly guitar solos.

Each song takes twists and turns, such as on "La Monogamie." The song begins with a nice little acoustic guitar reminiscent of the intro to the Beatle's "Across the Universe," but Malajube quickly transitions into their signature sound, then employ an orchestral chorus using numerous guitars and vocal harmonies, and then finishes with a crescendo of multiple voices, begging you to sing along. Then once the repeat-to-end of "La Monogamie" completes, Malajube give you a surprising bitch slap with "Ton Plat Favori," which encompasses Ragtime pianos and Mates of State harmonies. (Just to go back to new wave for a minute, Mates of States harmonies have always reminded me of Human League.) And then, out of left field comes a quirky electro-pop tune with rapping on "La Russe."

If John Hughes were in his thirties today, and French Canadian, he'd most definitely include a Malajube song in his movie "L' Amour a` 16 ans" to play at the end as the lead characters sit on a table and kiss over a lit birthday cake.