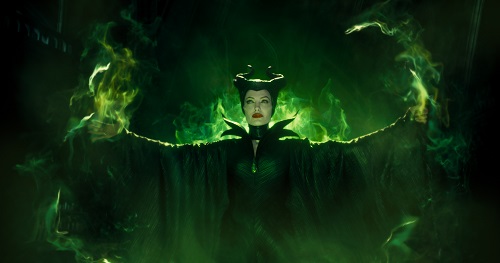 My mom took me to see Disney’s Sleeping Beauty when I was a small child, and the character of Maleficent scared and thrilled me so much that she quickly became (and has remained) my favorite Disney villain, ever. I mean, how can you not love a glamorous dark fairy with a pet raven and a penchant for casting really twisted spells? In the 1959 adaptation of the fairy tale, in addition to cursing the innocent Princess Aurora, Maleficent also kidnaps Prince Phillip, aka: Aurora’s one true love, intending to keep him her dungeon for 100 years and THEN release him to go kiss the sleeping beauty and awaken her. Damn, girl. That’s just extra cruel.

The shiny new version of Maleficent does a fine job reimagining its main character as a fairy whose evilness stems from being betrayed by the one she loves, and Angelina Jolie does a fine job playing her. She injects her performance with traits from the classic animated character, including chilling evil laughter, haughty line delivery, an arched eyebrow, and some fiery glances. Blinded by vengeance, this Maleficent delivers her curse in much the same way as the animated story—but things quickly become complicated as she observes Aurora and can’t stop herself from growing closer to her. In other words, her heart isn’t quite as black as her outfit would have you believe.

The developing relationship between Maleficent and Aurora was my favorite thing in the entire movie, and the story wisely focused most on that aspect. BUT … it seems like building a great Maleficent means every other character in the film had to suffer. The three “good” fairies (renamed here as Flittle, Knotgrass, and Thistletwit) have been elevated from dim-witted gals with good intentions to just plain stupid, self-centered, and neglectful caretakers; King Stephan is basically a caricature of the worst power-hungry man ever; and baby-faced Prince Phillip is in the film for a total of 5 minutes. Even Princess Aurora doesn’t have much to do here, which is a shame since we know all those Fanning girls have acting super powers. Even Maleficent’s pet, Diaval, seems to have more screen time than the charming fair maiden.

Of course, those other characters don’t really matter that much because: MALEFICENT! HORNS! CHEEKBONES! WINGS! A KILLER WARDROBE! SO MUCH MAGIC! And since the film’s setting looks so goddamn amazing no one will probably care that much. There is, of course, a ton of CGI, but it seems to make sense especially in the fairy realm, and it was nowhere near the levels of ridiculousness that, say, Alice in Wonderland was saturated with. A few other things that bugged: I felt like the action during the big action sequences moved too quickly for me to pay attention to anything, and there were a few “comedic” moments that made me groan a little, but I feel like that’s to be expected from a PG film.

None of this should sway you from seeing it, as my long-time worship of the character likely makes me a little extra critical—and I’m sure others will love and appreciate it just as it is (hi, Mom!). Fans of the ABC’s fairy tale mash-up Once Upon a Time, for instance, will probably give it two thumbs up. I just don’t happen to fall into that category, so I’m gonna stick with just one.