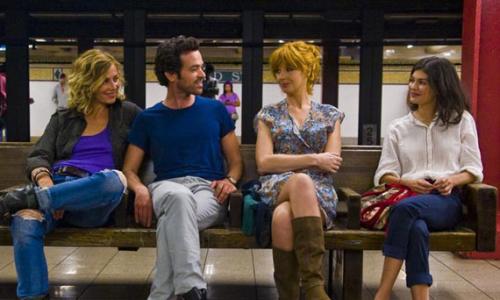 {Chinese Puzzle opens in Seattle on Friday, 5/30, and is screening at Landmark’s Seven Gables Theatre}

Cédric Klapisch continues his story of writer Xavier Rousseau—and the women that surround him—in Chinese Puzzle, the third film in a trilogy that started in 2002 with L’Auberge Espagnole and continued in 2005 with Russian Dolls.

Now 40, Xavier is a successful novelist married to Wendy (Kelly Reilly), with whom he has two kids. The couple has maintained a happy relationship for almost 10 years … well, kind-of. Once Xavier’s friend Isabelle (Cecile de France) asks him to help her and her female partner have a baby, things that have been starting to unravel between them completely fall apart, and Wendy leaves Paris with their kids for a new life (and new man) in New York.

Unable to live so far away from his children, Xavier packs up and moves to New York too, where conveniently, the now-pregnant Isabelle and her girlfriedn Ju live, so he’s able to snag a sweet apartment in Chinatown with their help while he continues to work on his latest book and navigate his divorce with the help (?) of a New York lawyer. Friend and first love Martine (Audrey Tatou) eventually lands in NYC as well; she’s now a single mom and business woman who has no trouble hookin gup with Xavier casually—even if he has some reservations about it.

Klapisch creates a colorful world for Xavier to operate in: conversations with his frustrated editor via Skype frame the story; dead philosophers appear to offer him romantic advice; animated memories of his previous life add texture; and a fantasy sequence in a sperm bank plus the almost absurd comedy of Isabelle’s infatuation with her young nanny add to the whimsical (ohgod I hate that I’m using that word, but it’s so true here) look and feel of the film.

It’s been awhile since I watched the first two, but it didn’t take long for me to get sucked right back into Xavier, Wendy, Isabelle, and Martine’s life, and I more than enjoyed the conclusion of his story. And because I’m a sentimental sap, the ending resulted in some very happy tears. Yup; I’m that person. Maybe you will be too?