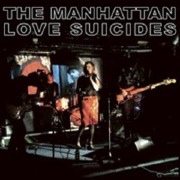 Here's a fun idea for all the family. Sit them ‘round the ol' family table, break out some paper and pens and have ‘em all play a good game of "Six Degrees of Separation — Velvet Underground" edition. Now, it's a little less straightforward than your typical Kevin Bacon style — no, instead you need to go with which bands were influenced by the Velvet Underground and all the intermediate steps it took to get there. An example would look something like this:

See, its that easy! So, now all you have to do to enjoy the fruits of your labor is sit back, pop in The Manhattan Love Suicides and let the echoes of doom fill your heart with joy… er, well, gloom.

Now this is where the whole chronology gets confusing because although the Manhattan Love Suicides exist in 2007, they actually draw more from sounds of their mid-80's predecessors like JAMC or Joy Division than what might be the logical comparators like MBV or Lush. The loose feel to the production and less reliance on complete fuzzed out noise sets the Manhattan Love Suicides apart from many of the post-C86 bands. However, it seems like this is a double-edged sword, as although the MLS wear their influences on their sleeve, sometimes they seem more trapped by them rather than inspired by the sound.

That being said, if you want to feel like you're back in late 80's/early 90's England, this is your band. Caroline McChrystal has that 'Miki Berenyi' light, breathy vocal style down and right from Darren Lockwood's opening riff of "Things You've Never Done" that sounds like it belongs on The Stone Roses, you know what you're going to get. "Things You've Never Done" is energetic and catchy — a perfect way to open the album. Much of the next few tracks just extend this pattern without really standing out from each other. The throwback sound is especially evident on "(The Guy on the) 14th Floor," which although can be incredibly infectious, also really has nothing in it that sets it apart from any randomly-selected JAMC song. This isn't necessarily a bad thing; you just listen hoping that they'll step out into the light as themselves.

The Manhattan Love Suicides are at their best when they don't get bogged down in trying to mimic their influences, and instead just let loose with the guitars and drums while letting Chrystal's vocals not get lost in the din. "Suzy Jones" is one of the best examples, an up-tempo song captures their sound without burying it in a heap of over-production. "Negative Push" is more aggressive and this works well for the band. "Crush Whatever" has a very playful feel to it, even buried under the distortion and noise, and ends up as one of the high points of the album along with the slower, Galaxie 500-influenced "Thinking is Killing Me" and "Providence."

The Manhattan Love Suicides are definitely a learned band, steeped in the glorious indie rock history of the United Kingdom. This is apparent from every note of The Manhattan Love Suicides and as a reminder of this era, it's an excellent disc. However, one has to be careful to not end up sounding anachronistic. At points during the album, you can tell the band has its own path to follow, they just need to feel the confidence to loose the waterwings and try a lap on their own.