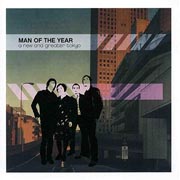 Man of the Year

A New and Greater Tokyo

Happy upbeat pop slides out of the first song while the second track, "Thank Your Stars" is a rock and roll anthem that gets you shaking your head in glee. Its perfect guitar feedback breaking over catchy vocals lets you down gently before the band releases you to the rest of the album.

From there it transitions from nice mellow sad-eyed songs to songs that you could throw on a rainy-day mix for a lost love to upbeat numbers that get the blood moving are also the ones that sparkle right out of the speakers and fly. The vocals move and harmonize, keyboards hit sparse in just the right make-you-cry moments, and heartbeat bass and drum build up until you're just full of the music.

This is a solid pop record that was written by a band that's intelligent and dynamic enough to be more than just a pop band.