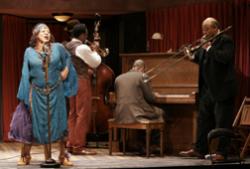 While waiting for 1920s blues diva Gertrude ("Ma") Rainey to show up at a run-down Chicago recording studio, a motley ensemble of musicians who make up her band bicker, debate, and basically rattle on and on and on for the first 40 minutes or so of Ma Rainey's Black Bottom, the landmark 1985 August Wilson play now at the Rep.

It's not until Ma finally appears (and no, we don't see her bottom) that the thing takes off. There's a big argument about which arrangement of the double-entendre title song will be used, another about whether Ma's stuttering nephew will perform the song's spoken-word introduction, and one more regarding Ma's insistence upon having a bottle of Coca-Cola® on hand during recording. Subsequent scenes sans Ma — and they are plentiful, unfortch — are akin to watching an episode of Will and Grace with the Jack-and-Karen scenes deleted, and it all sets in motion a destructive turn of events leading to a heavy thud of an ending.

Wilson's emotionally-charged Act II picks up the slack of a rather boring first half. I sincerely hope that, by the time you read this, a few more performances together will have allowed the cast to gel over time. (I also hope that you don't have an annoying audience-neighbor who insists on putting on makeup during the performance and waits for the quietest moments to click her loud-ass compact shut. Hello!)

Ma Rainey is a vital piece, with its still-relevant themes of African-American frustration and misdirected rage, and the truly great central figure (a towering musical pioneer, outspoken on women's issues and sexual liberation at a time when that just wasn't done) is a compelling MacGuffin around which this metaphorical story is entwined. And the Rep rightly seems to be going for a big anniversary celebration of this piece of Wilson's astonishing 20th-century cycle (ten plays about aspects of the African-American experience set in varying decades)… but, sadly, director Jonathan Wilson and the supporting cast weren't all up to the task on opening night.

Even so, the good performances almost make up for the lackluster ones, and local actress Cynthia Jones is loud, brazen perfection in the titular role. I love me a good brassy broad, and Jones has this demanding diva down pat.