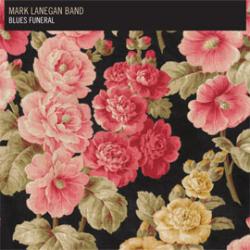 With his bass-baritone register and emphasis on sordid narrative, Mark Lanegan bears many similarities to Tom Waits and Johnny Cash. But while you love their gravelly voices because of the stories they tell, you love Lanegan’s stories because of his leathery voice: handled by Mark Lanegan, even the alphabet would sound profound. Unlike his melancholy storytelling compatriots, Lanegan’s singing holds up to a fuller sound, and even demands it. Occasionally, though, his looping, unhurried songs have walked too fine a line between hypnotic fascination and mind-numbing boredom. But when the tissue paper layers of his songs build to sufficient thickness, it’s impossible not to be swept away, as evidenced by Blues Funeral.

Blues Funeral is the first album released under the name Mark Lanegan Band since 2004’s Bubblegum, but don’t think Lanegan hasn’t been busy. He has released albums with Isobel Campbell, The Twilight Singers, Soulsavers, and The Guttertwins, in addition to making numerous guest appearances in the meantime. Despite eight years and nine albums separating them, Blues Funeral follows logically from Bubblegum. Blues Funeral is the more cohesive of the two, yet rarely dips into monotony. Guest appearances by frequent collaborators, Josh Homme, Greg Dulli, and Jack Irons connect the album to Lanegan’s other projects.

Blues Funeral is best enjoyed in its entirety in a darkened room, through headphones, with a bourbon in hand. Throughout the whole, lyrics are placed front and center, where, like the Man in Black, Lanegan yearningly explores unwholesome themes with only a flickering hope of Christian redemption.

“Gravedigger’s Song” opens with the urgency that is sometimes lacking in Lanegan’s music. Surrender to the narcotic effect of Lanegan’s voice and float away on the tides of “Bleeding Muddy Water” and “Gray Goes Black.” “St. Louis Elegy” washes you onto a dusty shore littered with tumbleweeds to join the shuffling slave march of the hopeless. The aching flow is broken by the surprisingly effective beat of the aptly named “Ode to Sad Disco.” The song is only slightly out of place and worth the interruption. It is easy enough to dive headfirst into the inviting void of “Phantasmagoria Blues” that follows. Just when you’re hopelessly lost in the darkness, the album peaks with “Harborview Hospital.” Here Lanegan sounds his best, lightened and offset by a transcendent meteor shower of atmospheric synths. The album closes with “Tiny Grain of Truth,” which takes a step back from the vocals. In their place, guitar effects work like the snap of a hypnotist’s fingers, allowing you to break back through the surface after submersion in the shadowy, suede and canvas world of Mark Lanegan.

The album’s release date is February 6, but you can listen to it streaming on KEXP now. US tour dates have not yet been scheduled.