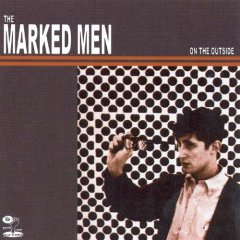 I was pretty sure there was nothing great in Texas anymore*, except for Austin of course. Crawford, Texas has obviously become the devil's lair; Houston and San Antonio are among the most obese cities in the nation; to make matters worse, that gross Matthew McConaughey is from there. Blech.

Happily, I am here to report something quite GREAT is in Texas. A fine punk rawk band of the purest breed — The Marked Men. They hail from Denton, Texas and boast two ex-Reds members. On the 29-minutes of their latest release, On the Outside they deliver an assault of grainy, rapid-fire, and catchy as all hell songs. Thank the good Lord they know fuck all about writing sappy love songs! Or if they do, they are repressing this talent and giving us all a fine reprise from the overload that is touchy and feely. I can dig a sweet love song just as much as the next imaginary friend, but a break was due!

The record begins with the four-piece ferociously ripping through the very strong title track, "On the Outside." It reminds me of the Dawn of-era Dickies. "Don't Lose It" follows with layers of rigid and sweaty guitars; the sheer heat of it made it my favorite song on the record. This torrid intensity continues on track after track with tight and punchy songs like "4,000 Times," not a throw-away track in the mix. Hell, there's hardly any time to take a breath. Well, maybe one: that short sigh of relief. Phew, for Texas!

*It should be noted this reviewer actually resided within the borders of Texas for THREE VERY LONG years, therefore not just blindly talking shit!