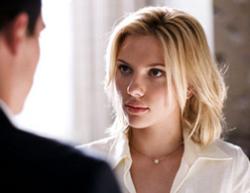 "I'd rather be lucky than good."

I'm sure that many of you had the same experience I had: sitting in a movie theater, watching the previews, and one of them is for a rather-slick looking suspense movie starring Scarlett Johansson and Jonathan Rhys-Meyers. Yet another vehicle for hot young things. And then the surprise ending to the trailer: Directed by Woody Allen.

Woody Allen? Not a comedy? Not an existential drama? Not set in New York, but London? The title cards are the same he always uses, so maybe it's not a joke? No joke, Woody tries something a little different in Match Point. Or is it really so different?

Rhys-Meyers plays Chris Wilton, a social climber in London (a place which still takes the word 'class' seriously). A former tennis pro, he meets and becomes engaged to Chloe (Emily Mortimer), a sweet, yet perhaps naive, daughter of wealth. The future son-in-law is given a good job in the family company and quickly becomes welcomed into the upper class.

Not so for Nola Rice (Johansson), the girlfriend of Chloe's brother. She is an American actress not taken seriously by the parents as a potential new family member and is soon driven off. But sparks fly when Chris and Nola meet, and the two have a sexy romp in the rain. She resists continuing the affair, but they meet again after Chris marries Chloe, and soon Chris is missing work for afternoon rendezvous with Nola. Will he risk his new luxurious lifestyle for this passionate affair?

There are two ways to think of this film: on its own, as a suspense film; and, perhaps unfairly, as a Woody Allen film. On its own there is not much to recommend it. We've all seen this story before, and seen it done better. Some of the early scenes between Johansson and Rhys-Meyers are memorable for creating some real sexual tension and character development. But they don't save the film.

As a Woody Allen film, it is good to see him branch out into new territory. The mainstream press has rewarded him with accolades for 'finally' making a mainstream film. But if you are Woody Allen, why make such a straightforward and conventional film? The filmmaking is pretty to look at, but not inspiring. Woody drops many of his usual conventions: a jazz soundtrack, dark and claustrophobic interiors, mannered and anxiety-ridden acting. Instead of claustrophobia, the feeling he goes for is vertigo: the wide open spaces and tall buildings of London society. But it doesn't translate well. New York suits him better.

Despite the newness in style, the story is familiar. Male infidelity and passionate choices. Female hysteria and neediness. In fact, many of the plot points are the same as those in Crime and Misdemeanors, a profoundly better film, with much better actors. (And a great example of how experienced, older actors may not generate as much heat as pretty young things, but they can generate genuine depth of feeling.)

New Yorkers have a tendency to loudly proclaim their opinion after, and sometimes during, a movie. When the credits rolled at the screening I attended, the woman behind me said, "That's the most overrated film I've ever seen!" Well, it's not that bad. But maybe she was hoping for what I was hoping for: something not just different from Woody, but something risky and original. In other words, classic Woody.