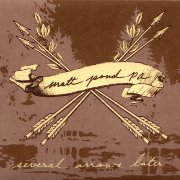 Matt Pond PA is every college-rock greenhorn's dream, in the nicest way possible. Pond & Co. have a knack for composing wistful slow-jams for the pre-emo crowd: accessible pop songs that carry just enough country-twang nostalgia and radio-friendly material to hook, line, and sink any novice to the genre.

Smart song structures, diary-page lyrics and sorrowful strings waft through Several Arrows Later, melding close to perfection. The songs are likable, pleasant even. The title track showcases what Matt Pond PA do well: watery guitar lines float into one another, playfully lapping alongside Pond's urgent, strained words and driving rhythms. And building ditties like "Halloween" are jaunty and relaxed and great for a sing-along.

But what I want is more out of Matt Pond, and his PA could ramp up a couple notches on the decibel system. Throughout the record, the band contributes lulling lullabies and good drive-time anthems. But on repeat listening, there's simply not enough depth, not enough risk on Several Arrows Later. By playing it a little too safe, the record is overly subtle, bordering on bland.

Every music fan has to start somewhere, and that somewhere might just be in Matt Pond PA. Not many music fans can deny dabbling with alt-rock lite during the formative years. And without those sweeter tastes, I can't say if I would have progressed into the edgier, murkier, more scintillating music that I crave today.

Several Arrows Later is a great starter to the music form that is college rock, ala the Wallflowers and Pete Yorn. But once you've heard similar, more developed and divergent bands that could be stuffed into the same bin (Clap Your Hands Say Yeah!, Interpol, Wilco), you hear what Matt Pond PA is missing: that something extra that sets those bands apart from "good" to "supreme."