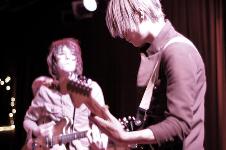 Fleet Foxes Will Steal Your Heart

Last Monday night I chanced upon a band that quite easily became my latest local favorite. It was an unexpected outing at the behest of my brother and some friends, who swore up and down that this show would bring true enchantment. And as witness to Fleet Foxes' first show, I can happily confirm that they were oh-so right.

Okay, truth be told, it wasn't quite the first Fleet Foxes show. They played a show earlier this year up in Shoreline but, in the words of frontman Robin Pecknold, "That doesn't really count, now does it?" Regardless of chronological details, the show I saw was immensely impressive for so early in a band's life. The entire band exhibits an onstage ease that belies their young age, both as a band and as individuals (the average age of a Fleet Fox being a tender twenty-and-three-quarters).

Their delightful, pop-styled songs sounded tight but not rigid and got the crowd swaying along straightaway. With bell-toned guitars, bright keyboards, and a dash of shimmer round the edges, Fleet Foxes craft deliciously melody-driven songs that are intensely charming. Lyrics reference textbooks, classrooms, and Romeos on bicycles, all without sounding twee or absurd. And Robin's voice brings it all together — his vocals are sweet and yet solid, with a rich warmth that seals the deal.

Fleet Foxes are so newly born that the only place you can find them right now is on MySpace (though I expect that this will change very very soon). And while they don't have an official record out yet, they've been selling self-released EPs at their shows — even more incentive to see them live posthaste. With two shows already scheduled in the coming months (March 14 at Chop Suey, and April 5 at the Croc), allow Fleet Foxes to fill your springtime social calendar.