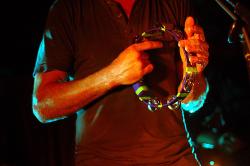 Matt Pond PA are some nice dudes with great tunes to match. Upon arriving at the KEXP in-studio space, the band tossed together their gear, and received a fateful phone call — the word was that opener, Jesca Hoops, had some gear stolen in a vehicle break in. “Shit, man!,” sighed Mr. Voice of Eternal Mountain Breezes in New Hampshire, Matt.

Despite the unfortunate mishap, Matt Pond and co. provided enough hits to fill in the incidental gap at the late (LATE!) show at Chop Suey later in the night. From the visceral hairshakes to the sweat steadily pouring off Matt’s hands, the East Coast quintet (complete with new guitarist/keyboardist) brought some mean chops to the table.

“I have one rule,“Matt sagaciously told the audience, “When you start a band of your own, make sure ALL your songs are always in the same tuning,” he quipped, as he painstakingly detuned the strings of one of the guitars among his arsenal for the night.

“What are your other rules?!” questioned a boy somewhere near the back of the audience.

And fun we all had, from the near striking of bassist Will, subjected to a shaker at the hand of Matt during the overenthusiastic encore at the end of the night. “Now that as a SOLID concert!” I overheard a twenty-something guy standing behind me gushingly tell his friend. Matt Pond PA set their own standard tonight and surely surpassed everyone’s expectations. And these guys know their East Coast gang signs… What’s not to love?