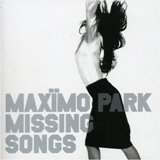 Usually, after merely one album, it might seem a little early to have a rarities compilation. It gives me the same feeling as seeing Ben Affleck or Dave Chappelle on Inside the Actors Studio: sure, they might be talented or popular, but have they earned the respect to deserve James Lipton's overly fawning interviews? You just watch it feeling that either (a) all the A-list stars were busy that night or (b) Lipton was drunk when they booked the show. Either way, it just doesn't seem right. Much in the same way, although Maxïmo Park are talented and their 2005 album A Certain Trigger was surprisingly good, the new compilation of rarities, Missing Songs, seems a little premature in their career.

For those of you who missed A Certain Trigger, now would be a great time to run out and pick it up. It flew under the radar as more attention was paid to similar acts like Franz Ferdinand, the Killers and Bloc Party. Missing Songs fills in some of the background material that likely lead to their 2005 debut, but it has that rough-around-the-edges feel of the leftovers from the studio and you don't want to start here if you've never heard the band. Maxïmo Park has the interesting distinction of being the first real rock and roll band signed onto electronic vanguard label Warp Records, home to such luminaries as Aphex Twin, Boards of Canada and Nightmares on Wax, which in itself make the Park worth a cursory listen. What Missing Songs can offer is a glimpse into why Warp took a chance on the band.

Maxïmo Park sprout from the seeds of Gang of Four and Mission of Burma, making catchy, danceable rock. They have a little more staccato feel then their genre-mates, with a wisp of the Ned's Atomic Dustbin "deadpan bass" sound to a many of their songs. This is apparent in the opener, "A19" that starts with swirling keyboards and leads into a catchy chorus, but it never reaches the level of infectiousness of songs like "Kiss You Better" from their debut. "My Life in Reverse" is reminiscent of the Weezer side-project the Rentals, with a strong power-pop influence. Probably the closest relative to A Certain Trigger is "I Want You to Leave" that sounds like the Who meets the Clash with strong rhythm section and clever lyrics abound: you think I want you to leave/it's not that simple to me/it all depends on the mood/innocent thoughts are misconstrued. The album closes with some rough demo versions of songs from A Certain Trigger, the best being "Once, A Glimpse" that starts with thunderous, rolling drums and builds a tension that is the hallmark of the album version. In hearing a demo like "Once, A Glimpse" you can see why people were so excited about the Maxïmo Park debut.

Some of the more adventurous turns from the Trigger sound make Missing Songs more interesting than it might have been. "A Year of Doubt" almost carries a Madness sound with it, right down to the chorus of I wait behind the factory gates/for you to finish off your shift. In what might sounds like a song that got lost trying to get to a Gogol Bordello album, "Stray Talk" has a gypsy-style guitar with bitter lyrics like and now we're both left out to dry/put out to sea and left to drift. One the album's highlights is "Hammer Horror", amusing merely for the use of what can only be referred to as "massive xylophone action" in one of the most surprising instruments in a rock song this year so far. The xylophone mimicking the guitar line is somewhat unsettling, as if a lounge singer decided that punk rock was the way to go.

The primary sin of Missing Songs is merely that of being relatively unnecessary. Three albums down the road something like this compilation would be a unneccessary addition that at this point, it feels like a gratuitous marketing ploy. The music is good, that's not the question. However, Missing Songs might have been a great second disc to a reissue of A Certain Trigger, but on its own, it seems like an empty gesture.