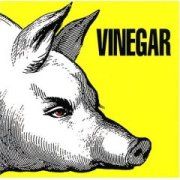 Hi. Remember me? Long time, no write, but I thought now would be a good time for me to give you a little friendly advice. We are still friends, right? I mean I know I disappeared just as you were starting to fall in love with my witty and erudite prose, my reviews that were oh-so-entertaining, yet consistently insightful, laced with subtext that really spoke to the human condition… but sometimes a guy just needs a little space, y'know? It wasn't you, really. I liked you. I still like you. We can still be friends, right?

(For the purposes of this review, I'll assume you checked "yes." If not, then I never really liked you anyway… and I always hated your haircut.)

Now that we have established this little mutual admiration society, I have something to tell you about. It's an album. By a band. And I want to save you some of your valuable time and money. Don't buy Rock Fetish by Vinegar. Trust me.

There are, however, a few caveats:

I do not like this record. Can you tell? If not, I can type louder.

Is it irredeemably horrifying? No. Everyone involved plays the same chords together at the same time. There are occasional (banal) melodies that lead through song verses to (uninspiring) choruses. Everything sounds familiar, which is no sin in and of itself. In fact, I think most of the best music I've heard in recent years has an air of familiarity, yet retains something unique and defining of its own. Rock Fetish is familiar but utterly indistinct.

"Forkball" opens the record with the most basic 4/4 rock beat, then manages to become less engaging by failing to provide a discernible melody or hook. Typically when the lead guitar fails to guide the melodic structure of a song, you can find the "tune" in the vocal. Not here. The vocal is more spoken than sung, with the syllables sitting uncomfortably on top of the music. It sounds as though lyric and music were written utterly independently of one another, then forced together. Basically, the whole thing is a rhythm looking for a melody; it's like half a song.

The album continues in this fashion, following basic verse/chorus/verse-type structures, words stuffed harem-scarem on top of the music, most songs ending somewhat abruptly after the "solo." Everything is played competently, though uninterestingly. The vocals, such as they are, have a snotty SoCal punk vibe.

The enclosed press kit gives the impression of a band that wants to have a good time. Now as anyone who has ever met me can attest, no one likes a good time more than I. Seriously. I defy anyone to have more fun than me on any given night. Ever. In fact, I dare say I have so much fun, I literally suck fun out of my surroundings. I have so much fun that there is literally less fun left available for everyone else. I mean, when I'm shouting at the top of my lungs and dancing on tables, ask the people around me if they're having fun. They use descriptive words like "annoyed," "bored," "irritated," or "homicidal," but very rarely "fun." I just suck up the fun like a big, fun-sucking… um… vacuum. Yep, I love good times. But this is not good times.

The lack of good times is exacerbated by track four "Breathe Again." They're going for the meaningful ballad… and I'm going for the Pepto Bismol. They should stick to the good time rock and roll. Or not. The more I reflect on this, there is a bit of a bar band vibe about the record. Maybe I'll go get a drink. Maybe several. Now.

Where were we? Oh yeah, track five. Where there's almost a decent melody, an attempt at a catchy chorus. It's still not good, but it's… forget it. I give up.

Looking back at the press kit, I get the impression of a bunch of guys "doing it for the kids"… and maybe here Rock Fetish succeeds. I can imagine some 16 year old full of piss and vinegar (no pun intended), ready to take on the world, hearing this record and saying in a moment of profound inspiration, "If that's all you have to do to make a record, then I'm gonna get me a guitar." And children are, after all, the future. Teach them well and… erm…

I guess that it really doesn't succeed that way, either. Oh well.

{ed note: JimiC, yes, of course we can still be friends! xo,tig}