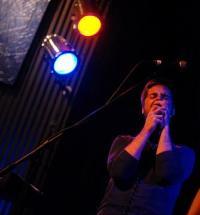 M. Bison with Facts About Funerals and We Wrote the Book on Connectors

One of the things I love about Seattle is that even when major venues are closing down (a moment of silence for the Croc), there are still places I haven't been to shows at and they continue to surprise me. The Nectar Lounge has an ideal set-up: the main floor is completely open with a few tables on the side, and the balcony is v-shaped so that you can see the stage from all of the railing-side tables. Alongside the stage is a garage door made of glass so that, should you need to catch a breath on the patio during an amazing set, you can still hear everything almost as if you were still inside. If Nectar continues to book shows like they have been in the last few months, this is going to be my favorite summer venue – unlike other concerts that get so hot and sticky in the heat because their venue lacks ventilation, Nectar's has a bounty of open space both inside and out.

Facts About Funerals opened the night with mellow vocal-driven melodies and an announcement by the lead singer that he was the proud papa of an 8 week old baby. Most of their songs fall into the "Buffy band" genre. If you didn't spend the 90's soaking in Joss Whedon's vampire version of the Karate Kid, the local club in Sunnydale always had a live band playing in the background of whatever vampy plot was going down; the bands were always good, but they took a back seat to the main story (or in this case, the next two bands).

It turns out that Facts About Funerals' bass player and keyboardist were home for the holidays, which explains some of the mellowness – they'll definitely be worth another listen when the band is reunited next month. I especially want to hear a bass line on the bluesy song that popped out of nowhere. Interesting Band Name Trivia, or why a band with "Funerals" in their name plays pop music: last year the band played in Texas and found a funeral-planning pamphlet on the floor with a catchy title. You can guess the rest.

Next on the stage was We Wrote the Book on Connectors, who broke the rules and wore their own band's shirts to the show. Edgy? Nah. I hunted down the keyboardist at the bar after their set, he says they throw the t-shirts into their costume rotation every once in a while to mix things up. There was a rowdier crowd for WE's louder and peppier sound, although some of that had to do with how many drinks had been imbibed by that point.

While the majority of the setlist owned the basic pop beat that most indie bands seek to individualize, it was surprising to see D. Murder leap up on stage to rap during "Gonna Eat Some Cake Tonight." Yes! Blatant genre fusion! Hearty arm-pumping approval! Another curious surprise was that during "Captain of the Future," a tribute to all things geek, the whole band broke out into a march-step similar to what your high school band looked like on their first day of practice. Between the ridiculous song lyrics, the cheesy antics of the band doing Captain Kirk imitations and the stage fog boiling over into my drink, I couldn't stop laughing in delight. Since The California Raisins are listed as one of WE's influences, that and their self-proclaimed label of moustache rock is all you need to know before marking your calendar for their next show.

If you still haven't found the perfecto gift for that hard-to-shop-for woman on your list, I recommend the We Wrote the Book on Connectors granny panties seen at the merch table – they have a design on the butt that begs a good line about moustache rides.

M. Bison finished up the night with a set to promote their new EP, Not Bad. They dove head-on into a rockblast start that drew the wandering crowd back to center stage, just what you would expect from a band that takes their name from a Streetfighter character. And yet, even though M. Bison has a loud & proud sound that makes you want to thrash around, they also churn out some terribly pretty harmonies – especially during the mashup between indie pop and 50's slow dance that bursts out in "Your Heart is an Organ." That song draws out yearnings in your ear's equivalent to a sweet-tooth, so much so that you'll either have weep in place or grab the nearest person and dance with them (I did a little of both). The next tune involved a go-round on a keytar, making my heart completely burst into a puddle of "kitschy instruments are sooo cool" goo and I floated around in a daze of happiness for the rest of the set.

The night was a pretty gorgeous mix of super hot bands and super cold weather. As we left, my plus one kept bouncing around using the word "awesome" every three seconds and ended up handing me the keys so they could continue reveling in the nifty line-up we'd just seen. While I originally I was bummed to miss the fabulous set for imaginaryLiz's birthday that was going on at the same time, it was honestly worth it to hear this triad of bands.