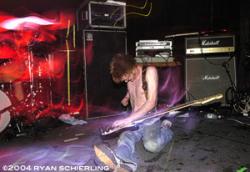 mclusky, with Oceansize and the Standard

mclusky has a special place in my heart. I still include their 2002 release, mclusky do dallas on the list of staples I recommend to anyone. Not to mention I have them to thank for all the uses for the word cunt and how it's applicable to nearly any situation {except for when you meet your boyfriend's parents the first time}.

And to return to Seattle with some folks from Portland {the Standard} and Manchester {Oceansize}… well, I was jimmy-crack-fucking-whore excited.

First up, the Standard. A meek lot whose mission statement for the evening was to mesmerize the audience with their haunting, complex songs rather than overtly entertain or connect with the onlookers. Their meticulous attention to detail made their sharp-cutting guitar plucks and syncopated forthright rhythm section feel lush and grandiose. There was not a sing-along chorus or flashy G-chord strum in their set.

For the group — and lead singer Tim Putnam especially — the songs possessed them. Another demon was exorcized from their bodies with each calculated note, with concentrated fixation on their instruments, expressively twitching eyebrows, and solemn demeanor. I was swept up in their methodic conjuring.

I have no idea what the lyrics were, but they sounded like they are pages from Putnam's diary. His tremulous inflection was nothing if not expressive and full of confession and sorrow. At times, the fragility and expressive characteristic that separated his vocals from other confessionals took form of an unmistakable goat-sound. {Note: I write this with the utmost respect and adoration and I know full well that I am going to be struck down by lightening.} This slightly hampered the experience for me, but the guys I was with enjoyed their no-frills, anti-emo approach to exorcism. One imaginary boy was quoted as saying, "The Standard are amazing."

Over the past few months, I've had numerous emails sent my way touting Oceansize's "daring, genuinely progressive noise." As with most sweeping PR statements, that particular claim isn't wholly true or false. Their music is genuine. And noise. Daring, perhaps. They've explored ground that has been individually covered by others, but I think their mix of Muse, Tool, Sting, and King Crimson is the first of its kind. Their self-absorbed stage presence did intensify the experience for onlookers, but, personally, I found it creepy in parts.

The guys in the first four rows were loving it. The majestic guitar swirls, nonsensical use of metaphors and faux experimentation left them screaming things like "You're the best!" and "I love you!" To which I exclaim, "Congratulations! Good for you! Give me some fucking mclusky!"

With a fresh and appropriate amount of genuine acerbity in my system, I witnessed my second coming of the Welsh trio mclusky. Not much has changed {or tamed} since last we spoke of the m-boys… except that now they have a legion {500+} of sweaty, rambunctious, fans who find comfort in each and every lyric in the mclusky catalog.

And justifiably so. They bestow an intense assault of effortless anthems that are addictive, genuine, and cozy. The lyrics explore their their cut-and-dry opinions on topics of over-consumption, war, mass media, and sex criminals.

I am not sure if it's because their messages are delivered with such force or because of the direct verbiage they use, but each insightful nugget of political discourse and social commentary is impassioned enough to instigate a reaction from the most apathetic hardheaded punk. Who needs weepy passive allegories when mclusky can get a roomful of Seattle-ites to sing along with verses like "All of your tales are lies" and "Thorazine given in your food will stop the headaches"? They even made a deal with the audience, "We'll take care of Blair if you take care of Bush!" Fucking cunt! I'm IN!

Substantiating the verbal message were the most commanding bass lines I've experienced in some time. Bassist Jon Chappell drove each song with unabashed pounding and potency. The drums supported him with a constant and consistent thunderous roar. Lead singer Falco's guitar was poked and jabbed to release a crackling wail that harmonized with his screeches and moans. They used timing and sparseness to their advantage and turned uncomfortable dissonance into melodic carols.

In sum, the mclusky lightsaber-concoction created moments in time that left me feeling exhilarated, exhausted, pissed off, and content. When the show ended, I felt fully awake for the first time. Ready to conquer the world… after that shower.