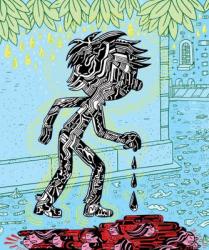 This panel was of great interest to me since getting fiction published through McSweeney’s would be a dream come true, so even just hearing this authors, all first-time published fiction writers, talk about the experience of having Eli Horowirtz, McSweeny’s editor, work with them on their novels was a treat.

Bill Cutter, author of “Fever Chart,” claimed that he unflinchingly did pretty much everything Eli told him to. Meanwhile Jessica Anthony said that when editing a particular passage of her book, “The Convalescence,” Eli had her write six different versions and on the seventh she told him that this was her final draft (it was also the original text, before she had changed anything) and he responded that she nailed it. James Hannaham’s book “God Says No,” described the liberating feeling of cutting the first five chapters of his novel before even sending it into the Dave Eggers founded publishing house for consideration.

The panel included readings from each author, all whom seem to place their eccentric characters in absurd situations. A near midget shitting in a bucket and slinging meat from a broken down bus in Virgina, a man fresh from the psych ward cultivating a pimple as an excuse to make conversation with a bartender, or a latent homosexual unwittingly picking up a lactose intolerant lady of the night and trying to buy her ice cream, are some examples of what their books had to offer.

What was most interesting however was the banter between these three authors whose only connection to one another was that they had all recently been published by McSweeney’s. Cutter’s statement that he doesn’t give a fuck about the story, “I just like the sentences. The editor makes the story,” was met by a skeptical expression on Hannaham’s face. Though both men agreed when Jessica Anthony referred to her endeavor in a career around fiction writing saying that it came down to either becoming a writer or a felon. It would seem these three had no choice. That writing was something they were driven to do. Whether they have to turn off all the lights and get inside themselves in order to get the words on the page or dance around to Queen’s “Tie Your Mother Down,” they seem to agree that the writer is always working, whether or not they are in front of their computers.