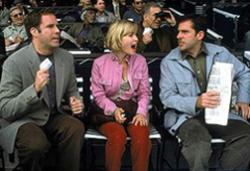 "Of course I'm communicating – could we just not talk about it?"

Woody Allen's latest annual offering, Melinda and Melinda, tells two different tales of two completely different characters named Melinda. The only things these Melindas have in common is that they look more or less identical (though not as much as you'd suppose given that they're both played by the same actress, the extraordinary newcomer Radha Mitchell) and that they both show up unexpectedly at the dinner party of some friends having recently attempted suicide over a lover's infidelity.

The conceit of the film is that those few facts can be spun either into a tale of tragedy or of comedy, depending on the context and the cast of characters. Before we meet even a single Melinda, we're treated to an argument between two playwrights about the respective merits of comedy and tragedy. One of their companions tells a story, which we don't get to hear, and asks the bickering pedants whether the story is a tragedy or a comedy. The comedic playwright (I think it was the comedic playwright — even though one of the playwrights is played by the starkly identifiable Wallace Shawn, I couldn't really tell these characters apart) insists that it's ripe for tragedy. The tragic playwright says no, it's clearly a comedic situation. And a fourth dinner companion dismisses them both, saying there's no way to know and, essentially, it's a dumb argument.

She's right. The argument is inane at best. Allen's far too smart even to pretend there aren't elements of both comedy and tragedy in every story, especially in any story he'd be interested in telling, and he spends the next two hours demonstrating just that. Plus, we don't even know the story, so we can't make any sort of informed judgment one way or the other. So why bother framing it that way at all?

The explanation, or the excuse, depending on how charitably you feel towards Allen's, um, repetitive approach to scripting, is that each story is made slightly more interesting by the juxtaposition of the other. Allen cuts back and forth between them deftly, and for all I complain that we don't KNOW what's going on, it is fun to watch each interpretation unfold. It's like a page-turner — what will happen next?

But if I had my way, Allen would have taken a few extra weeks and fleshed out the tragedy story until it could stand on its own, and then jettisoned the whole comedy plot. That story is entertaining enough, but it's really only interesting because it's staged in the alternate universe of a much meatier, more poignant story. The tragic story is what really yanks at the ol' regret glands we early- and middle-oeuvre Woody fans (perhaps unfairly) bring to each new offering. Oh, what might have been!

Still, what is there really is very enjoyable, and sometimes very good. In the tragedy track, Melinda, an uncategorical mess of bad luck and bad choices, descends on the picture-perfect but intensely fragile balance of her upper-crust artsy liberal New York friends and helps their illusion to unravel. Chloë Sevigny plays Laurel, a Park Avenue princess who married the star actor in college and insists on living just beyond their means. Jonny Lee Miller, of Hackers and husband-of-Angelina-Jolie fame, plays her alcoholic husband. Allen deftly plays them both against type, the way he did so effectively with a newly post-rehab Drew Barrymore in Everyone Says I Love You. Sevigny's most recent escapades include giving her then-boyfriend director Vincent Gallow a blowjob on screen in The Brown Bunny, and I can't imagine Allen doubts we'd have that in mind as we watch her traipse about town in demure pencil skirts and updos. But she rises beautifully, elegantly to the challenge. Her polite, deliberate pursuit of happiness is a lovely counterpoint to Melinda's passionate, headlong approach that seems destined to end in, well, tragedy. But even in the comedy track, the point is that everyone deserves a little love, and you can't fault people for looking for it. Even guys like Woody Allen.

The predictably stellar cast (say what you will about Woody — the man elicits superb performances) is too large to give everyone a personal shout-out, but suffice to say that everyone is most excellent. Will Ferrell's performance in particular is worth a mention. He plays the standard Woody-type character in the comedy track, but without too strictly caricaturing Woody himself. (It's a feat few have managed — witness Kenneth Brannagh's full-body possession in Celebrity.) Ferrell's interpretation is much more innocent and less self-conscious than Woody's, more bumbling than neurotic.

Other highlights include Brooke Smith as the lone voice of reason, one of the most giddy break-up scenes ever filmed outside of a Nora Ephron picture, and James Brolin on a trampoline. Can't go wrong with that.