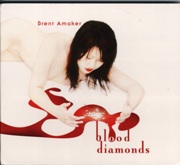 If you are new to Brent Amaker and his former musical incarnation Dorkweed, it might be wise to ignore the first track, "Technology," on the quirky, deep-voiced one's debut solo effort, Blood Diamonds. Really, just skip it. "Technology" is goofy, jokish, and it might spoil your interpretation of what lays ahead on the rest of the great seven-song album. As Blood Diamonds progresses, Amaker proves himself a strong and serious solo artist as he explores darker, more genuine territories, tongue-lodged-in-cheek swagger traded in (mostly) for edgy earnestness.

With his former band, Amaker's songs picked up traces of influence from bands like the Pixies, David Bowie, and Amaker's home-state heroes The Flaming Lips. Those elements grace Blood Diamonds though the songs are more straightforward than some of the avant-adventures of those cited influences. Today Amaker and his band mates (drummer Aaron Mlasko, bassist Sugar McGuinn, guitarist Mathew McGowan and guitarist and producer Tim Harmon — the lot of which make up one of his two backup live bands, The Rodeo) just hover the line between silliness and sincerity, leaning much toward the latter. They embrace a playful rock and roll attitude tinged with a smidgen of brood to keep the chuckles to a minimum. And though it may be tough to comprehend, the record was recorded almost entirely live in a single room in Mlasko's house.

The strong suit of local boy Amaker — with his recognizable voice that's a bit Jagger with Iggy Pop and Ric Ocasek thrown into the pot, as igDana so rightly pointed out when she saw Dorkweed live last year — is his songcraft, a simple but savvy mix of pop-rock hooks and verse-chorus-verse arrangements. And track by track, though Amaker stays within the three-minute pop song formula, he explores unique territory.

Let's start with the aforementioned "Technology", a song that might be the closest Amaker gets to hip hop. But it's closer to Kip Dynamite's interpretation of the genre than his nerd-cool brother Napoleon's sweet soul. "You don't need a secret decoder ring to figure out what's bugging me" and "Help me, I'm dying inside. Not like some stupid robot machine…technology, is killing me" are just some of the spoken lyrics sandwiched by an ethereal female-vox hook that wafts over the top. Before the song ends, Brent encourages us to slap his ass so that he can feel alive, some hot-licks and funk jams appear, and all this is layered over Beck-ish beats and computer-distorted background vocals. Really, it's that weird, and I should just stop talking about it and beckon you to listen (samples of the track are available on his website).

After this odd-bird, however, the album opens up into its other personality, and things start moving along more swimmingly. "The Other Thing That's Killing Me" sounds like the lost B-side to Leonard Cohen's "Everybody Knows," Amaker's gravely, spoken-words resonating in the very low ends of the bass clef atop a walking riff and feedback-laden guitar's noise. I really love "Hustler." No, not the magazine (a little over the top for my taste) but the third song on Blood Diamonds. It's sultry, sweet, and a little sexy. And another close favorite is the shakin, They Might Be Giants-ish "Tunnel Underground," replete with a swanky sax swing that serves as a fun fit to close the record.

In total, Blood Diamonds lasts under 18 minutes, chock-full of mostly sweet and dirty ditties that would sound great accompanied by a good swill of beer and a good set of friends stuffed into a divey rock club setting. Sound like your jam? Then you're in luck because Amaker has a CD release party for Blood Diamonds this week at the Sunset! (Brent Amaker & The Good Game, Elvis Huxley and The Graze grace the Ballard joint April 28th.)