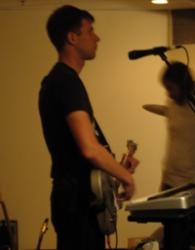 Life is full of surprises (free Menomena show in the middle of nowhere) and few certainties (death, taxes, and long delays when flying through Chicago’s O’Hare International Airport). Sometimes these two factors intersect and you find yourself on the side of a dark Iowa interstate trying to talk your way out of a speeding ticket with a befuddled Iowa State Trooper.

Our conversation went something like this:
State Trooper: Where are you two headed tonight?
Me: Grinnell to see a concert.
ST: Who’s playing?
Me: Menomena
ST (confused): OK… why is he driving (my 57 year old father)? Are you planning on getting drunk?
Me: No, I just don’t have any idea where Grinnell is. I flew all the way from Seattle on Wednesday to bury my grandpa and my aunt over the weekend and this is the only positive thing I’ve got.
ST: Ok, um, right, well slow it down a little. Enjoy the show…

And with that I was off to tiny Grinnell College to attend a free Menomena concert with my dad. Grinnell is halfway between Iowa City and Des Monies, which officially puts in the middle of nowhere Iowa. It’s a small school that, according to my dad, is one of the most expensive schools in the state. It also may or may not have been the college that Gallop, of Gallop poll fame, attended, and he may or may not have endowed the school with untold amounts of money. My dad also claims that no one from Iowa goes there and that it’s all rich kids from the east coast who couldn’t manage to get into Ivy League schools. More than likely, 26% of these statements are true, but I have no way to verify any of them. I can verify that my dad is amazingly cranky and grumpy (but a good sport nonetheless.)

We arrived at the school by following the directions listed on the Grinnell Concerts website, which was conveniently linked from Menomena’s Barsuk page. The directions said to enter the Main Hall and descend into the basement of the Main Hall to the Gardner Lounge where the concert would be held. These directions did not say that all entrances are secured, so we stood in the cold and listened to a woman perfectly whistle The Beatles “Piggies” while smoking a cigarette. Yes, this was as impressive as it sounds.

Eventually somebody came out of the building and we snuck in. The basement looked like a white cavern with shitty wooden furniture scattered about that kids were lounging around on. The website had said that you didn’t need to be a student to attend and that all were welcome, but I’d say of the 200 or so people in attendance 95% of them defiantly looked like students. This hunch was reinforced as few of them exhibited the ability to pound down cans of beer in the amazing fashion that only those attending institutes of higher learning can display.

After a series of sound checks, Justin Harris (bass, guitar, saxophone, the guy who’s usually in the middle) said “thanks for coming out….uh… to your own school.” I got the distinct impression that he was not informed that this show would be like playing at a college house party and that he wasn’t too happy about it. (This was reinforced later in the set when someone asked why they were in Grinnell and he replied “money.” That being said, Brent Knopf, the keyboard, guitar, guy who’s usually on the left, sincerely thanked the crowd when they finished their set and was incredibly friendly to me and everyone else that he talked to after the show.)

The band struggled through the first few songs, as they lost the amps a couple of times and pretty much everything that could go wrong did. Early lowlights were “Hustle and Blow,” as Harris called it, when the sound completely died about three quarters of the way through the song; although it was cool when the crowd finished up “and hustle on” as a congregational sing along. Harris also asked if this was the worst concert everyone had ever been to and the whole band raised their hands. I think they were half joking, but at this point it seemed like the show was dangerously close to running completely off the tracks.

After a few more technical difficulties, the band righted the ship and played a spot on “Strongest Man in the World.” Every time I see them this song ends up stuck in my head for the next few hours and this evening was no exception. Everything from that point forward was text book Menomena; harmony, instrumentation and general coolness. My dad found a wide spot on the floor and sat down; every so often I would see him tapping his foot or beating out a rhythm on his thigh. Although he would later claim that he could start an indie band by playing a punch press and other assorted sheet metal tools, deep down I think he liked it, although it would be hard for him to admit it and keep up that cranky Hanken persona.

My only complaint is that they didn’t play “Running.” Any song that contains the lyrics “before the cows come home” should be mandatory when playing in Iowa.