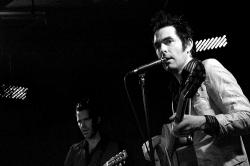 Saturday night at Chop Suey, we were treated to three totally fine gigs by the Fucking Eagles, Power Solo (from Denmark), and Heavy Trash. I wasn't too sure how the night would go initially: would the show be overrun with greased-up dudes who look like mechanics or would the venue be empty?

The Fucking Eagles went on first. To be honest, they were the real reason we went to this show. I saw TFE's a few weeks ago at the Jules Mae's and they just rocked rocked rocked me. I was glad to be able to see them again. If the bill had just been Heavy Trash on their own, I might have done something else last night. Then again, Jon Spencer is just so freakin' hot, so who knows? But I digress…

The Fucking Eagles are a really solid garage band, kind of like the MC5, minus the political stuff. They have the craziest and absolute best drummer I've ever seen. I don't normally pay all that much attention to drummers, but with this guy, it's impossible to not be drawn in by his energy. It's as though he's missing a few of his top vertebrae, the way his head spins around. I don't know how he managed to simultaneously stay on beat and on his chair. He must have grown up watching a lot of The Muppet Show, 'cause he totally channels Animal from the Electric Mayhem. He's amazing. His drumsticks move so fast that they look like those fiber optic wands that dumb people buy during street fairs. Anyway, he's always definitely worth a watch.

The Chop Suey crowd was still pretty light at that point but people were drawn in quickly and couldn't help from bouncing around a bit to the speedy riffs and thumping bass. Songs included "He Won't Love You Like I'll Leave You," "Breakaway," "I Gotta Plan for Saturday Night," and "Baby I'm Coming Home." At times, all band members sang at once, including crazy-drummer-boy who practically swallowed his mike when he inserted his numerous howls and screams at all the appropriate times. By the end of the show, several audience members got caught up in the groove and openly danced. The whole band always seems to have a lot of fun playing together, although the performance was a bit less raw in this venue. Still, I'll go see The Fucking Eagles any ol' time.

Second up was Power Solo (from Denmark). I didn't have any prior knowledge of them. And holy crap, I wasn't prepared for what I saw. Two hopelessly skinny Danish dudes with hella stage presence, wearing classic cowboy shirts and working the sex appeal with handlebar mustaches and old-school hairstyles.

Although the crowd was still smallish, it was growing and loads more of us were dancing during this set. People were just losing their shit all around me, it was infectious. The charismatic frontman (Kim Kix) was totally playing to the crowd, giving a lot of shoutouts to "the ladies" and doing mini-windmills on his guitar. His more stoic brother (Atomic Child) seemed content to just wail on his guitar in the background, he even busted out the lap steel for a couple of songs.

They showed a ton of variation in their vocal style, at times similar to the Beastie Boys battery-style rap and then later giving us a funny Tejano-style song in Spanish. Power Solo is a little hard to classify – even though they definitely fit into a certain genre, each song has it's own flavor: funny, sexy, rangy, funky, even a little heavy metal thrown in at times. The music isn't just typical rockabilly but what I later find is known as "Donkey Punk." I think the band actually made that up themselves though. 'Cause they're a funny bunch of dudes. At any rate, they are seriously talented musicians and the crowd was really having a great time at this show. I bought a CD. Know what it's called? It's Raceday…And Your P*ssy is GUT. What the hell?

I actually felt bad for Heavy Trash, having to follow Power Solo, but the crowd was definitely warmed up anyway. And Jon Spencer can always hold his own. But oh! As a nice surprise, Power Solo actually came out to back them up. Jon Spencer and Matt Verta-Ray took center stage, flanked by Kim Kix on standup bass and Atomic Child playing the lap steel guitar. Even the Power Solo drummer was pulling double-duty on this one. And hot damn, Jon Spencer looked as gorgeous as he always does, the man is seriously aging well. This is also reflected in the tone of this band, there seems to be a little less attitude and posturing and a lot more focus on the music itself. It's still Jon Spencer overall: blues-y but with more of a rockabilly/psychobilly slant; rich, round, far-reaching vocals, he's just got such an awesome Elvis voice.

The music was alternately totally plugged in and raucous and then quickly scaled back to a lo-fi, classic country vibe, especially on "Double Line," which I really enjoyed. I love to watch Jon Spencer live, he segues effortlessly from song to song with no break in between, no audience banter, just the occasional arrogant, in-song band shout-out that comes standard with any of his projects. Heavy Trash is no exception. The music was really reminiscent of Johnny Cash on "Rockabilly Blues" and you could practically hear Waylon Jennings himself on "That Ain't Right." Boy howdy, that's great stuff.

While I don't normally go out for rockabilly, I have to admit that I really really enjoyed the Saturday evening festivities at Chop Suey. It's nice to challenge your musical stereotypes and break from character every once in a while. You never know, you just may find some insane Danish band you can't live without. Overall, the bands and the audience all really seemed to enjoy themselves and it was one of those rare nights when everything was just awesome.