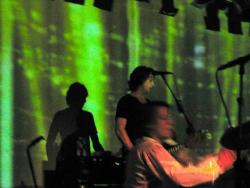 In the summer of 2003, a friend gave me a burned copy of a Mew European import, Frengers. Before this, I had never heard of the band and was, in general, very skittish of bombastic, stadium-sized Euro-pop. But I listened to this CD in the car all the way from Chicago to Seattle and was captivated for all of the thousand plus miles of interstate. These waifish, Danish boys had me hooked not only on their music, but also on an entire genre of music that has been a source of ridicule for me ever since.

In the years following this period of Frengers high-rotation (the burned cd actually died from too much play), Mew quietly slipped off my radar for a few years. I occasionally heard “Am I Wry? No” on the radio and passively reminisced, but never considered following up. When I heard they were headlining at Neumos, I decided to rekindle my relationship with Mew.

The venue was pulsating with a very eclectic group of people, which was impressive seeing how it was Monday night. From hardened hipsters, to fresh-faced teenagers, to members of Ballard’s Scandinavian community (I swear I saw them holding a Danish flag), it was definitely an unconventional and quirky crowd.

The show was opened by Oh No! Oh My!, a rather talented straight-up indie-pop band from Austin with a front man in the vein of James Mercer and enough keyboards onstage to choke a small horse. They were polished and entertaining, and did a good job uniting the diverse crowd and getting the tempo moving.

After a small break between sets, Mew arrived amongst haunting vocal harmonies and dizzying lighting that felt like a Kubrick movie. When they had taken the stage, I realized that Mew (who I had only seen pictures of) looked exactly like the music they played. Front man Jonas Bjerre wore a little school-picture-day vest and interwove his impressive castrato-like vocal range with pouty, theatrical facial expressions a la Mick Jagger. The rest of the band piled on the rich instrumentation until everything was just one big dragon fantasy of throbbing sound.

The dream-like quality of the songs were accentuated by the backdrop of disturbing visual art that ran the gambit from a distorted rabbit head on a human body to ghoulish illustrations of an old and tired man. The whole experience was decidedly artsy, loud, and in one word: European.

The crowd reacted best to the material from Mew’s first release Frengers, and were whipped into a frenzy when the band played arguably its biggest hit, “Am I Wry? No” early in the set. While everyone rocked with stone-cold sincerity, I lost my composure and had to laugh at loud when the words “Am I Wry?” and “Diamond Ring” were projected on the backdrop in real-time, as if we were experiencing some sort of magical, prog-rock sing-a-long.

My favorite of the band’s songs, “156,” was played mid-set, and I found myself a little disappointed with it. The song started out spectacularly, but soon digressed into complete chaotic noise. This seemed to happen with a lot of the songs, and while I would normally find these variations a nice change of pace to see done live, I wanted more uniformity and consistency in the songs. My distaste for the crippling noise could also be due to the fact that I was standing right under the speakers and right behind the drum kit, and by the midpoint of the set I could taste the blood running down my throat from my ear canals.

With all this said, Mew put on a fantastically rocking, yet unexpectedly creepy show. I’m glad that I got to see the songs that I was well-acquainted with live, and to hear the unique group of Mew fans sing along to every word.