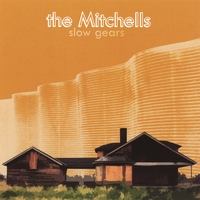 The Mitchells have made an album that's fine. Not good, not bad, just fine. That's the problem.

As it begins, Slow Gears is sonically interesting enough — opening track "Still Might Happen" sounds like standard fare from a Northampton, MA band (ie: Silver Jews, Sebadoh). Then track two begins and sounds… an awful lot like track one. And track three. And so on. And it's not that the song template that's seemingly reused here is so bad, it's just that after listening to 10 slight variations of it, it becomes very boring.

There's no denying that the bandmembers are terrific musicians. The instrumentation is tight throughout the record, and with more interesting and varied vocal melodies, these could probably have been much more compelling songs. But it just seems as though singer/guitarist Caleb Wetmore has made a sponsorship deal with the same three notes and his contractual agreement won't let him touch any others. And it's not that his voice is bad; you just get so tired of the monotony.

The song where the formula works best is "For Your Winter Semi Formal," a ballad with high guitar plucks and well-used tambourine that builds to a full finish. It stands out as a bright spot on an otherwise meh horizon.

The Mitchells' sound calls to mind another Massachusetts band, Boston's Black Helicopter. Both bands have a similar basic sound; however, Black Helicopter's songs fully realize their potential, and their recent Invisible Jet is masterful. Sadly for The Mitchells, Slow Gears needed to up-shift, but instead seems to have gotten stuck in neutral.