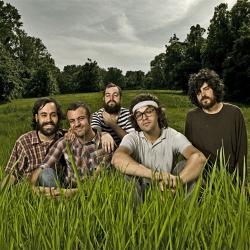 Although Brand New was the headliner for two sold-out nights at the freshly opened Showbox Sodo, it was the opening act that brought me. Mewithoutyou is a band I hadn't heard of prior to seeing them open for another band several years ago. I was instantly hooked. Last nights show re-affirmed why this band is still in my all time top ten (if i was ever forced to choose such a list).

The band's music steers away from typical song structure, and the combination of Aaron Weiss's spoken word lyrics and drummer Rickie Mazzotta's exciting and harmonically perfect execution is really something to take in live.

They played to a largely Brand New-oriented crowd but their fans made their presence known when they began playing "Messes of Men." The song's dramatic changes in volume and pace were complimented nicely by the new Showbox lighting. As a photographer, I was extremely disappointed in not being able to shoot at a Seattle venue that for once had more than adequate lighting for a rock show.

The set was short yet powerful and included many songs from their newest album Brother Sister (released by local record company Tooth And Nail). Although I was hoping for some older songs (which are different and show the progression in the band) I was not disappointed. Aaron used an accordion as well as several shakers/tambourines that got the crowd backing up the band with clapping/harmonizing during "O, Porcupine." A fan offered Aaron a fitting bouquet's of dandelions. He instantly replied with a rare full-on smile "Thanks to the people who brought these flowers and thanks to the people who didn't bring these flowers," he said. All in all it was a short but sweet glimpse into a band that deserves more than a thirty minute listen. I leave you with a YouTube video from another mewithoutyou show, for anyone who hasn't yet heard or seen their music.