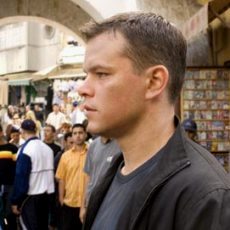 Typical of many a summer movie season, this year's has had its share of silly, loud, teen-male-friendly fun. I'm talking Ocean's Thirteen. And Transformers. And Hot Rod. And many I did not and will not see (Live Free or Die Hard, 1408, Underdog).

Since there's no better place to beat the summer heat than at the movies, and since there are plenty of quality offerings currently in local and national cinemas, here are ten of the best bets, followed by two can't-miss coming attractions, in alpha order:

The Bourne Ultimatum. If, like me, you liked The Bourne Identity and loved The Bourne Supremacy (even after Franka Potente got killed off), and recognize Paul Greengrass as our finest action director (what do you mean you still haven't seen United 93?), then you've probably already experienced the incredible culminating installment. I thought The Village Voice's Nathan Lee may have been overstating when he called it "some of the most accomplished filmmaking being done anywhere for any purpose." Now, having seen it, I cannot disagree. On every level it's the most accomplished of the MacGuffin-happy Jason Bourne saga, and one of the best films of 2007.

Hairspray. The most pure fun I've had at the movies this summer. Period. Yes, haters, even with Travolta in drag; the real star is newcomer Nikki Blonsky anyway. Tap into your inner gay male (we all have one there somewhere) and let yourself bask in the singin' and dancin' and color and joy.

Knocked Up. Judd Apatow's latest comedic gem opened nationwide in June and is still doing decent US and international boxoffice biz. Back when it played SIFF '07 I wrote that the simple babydaddy premise "doesn't get at much of the 132-minute story; watching it feels like sitting through a short season of ingenious TV. That said, Knocked Up is no 40-Year-Old Virgin, and definitely no Freaks and Geeks, but it's still funny shit."

My Best Friend. Some critics have dissed the great Patrice Leconte's breezy French-language comedy about a friendless asshole (Daniel Auteuil) taking a colleague's bet to befriend a charming but lonesome cab driver (Dany Boon) as a trifle. I choose to stand by my SIFF '07 micro-review: "Even light-side Patrice Leconte is elegant and grand."

Paris, Je t'aime. I'm pleasantly surprised that this lovely package of 18 short films (by directors like Olivier Assayas, Gurinder Chadha, Gus Van Sant, Tom Tykwer, Wes Craven, and the Coen brothers) has managed a strong local run for nearly two months. Like the next film on this list, it's a delightful love letter to the City of Lights; any good Francophile should make 'em a double feature on some 90-degree day.

Ratatouille. A beautifully shrewd bit of pop-entertainment genius by Pixar. In it, an unlikely upstart with ridiculous skillz leads around and supports the clueless minion of an established but fading organization after its beloved founder (and namesake) dies. The powers that be have sold out the beloved leader's image and reputation for quick profit… an error in judgment that is corrected when the upstart ends up taking over. Status quo is challenged, a major reorg takes place, and the old school is forced to rethink its antiquated assumptions. Then there's a gorgeous visual representation of sense memory that suggests a revisitation of the kind of joy not experienced since childhood. Sound familiar?

Sicko. Michael Moore's US healthcare critique should be essential viewing for every American. To quote myself once more: "[Moore] employs the devices you've come to expect: passionate but compromised messages and in-your-face style, lots of humor, a series of subjects telling their war stories (here, undeniably infuriating ones of denied insurance claims), and a plethora of info on hard day-to-day realities that many of us probably don't consider."

The Simpsons Movie. It's like four extra-lewd, extra-funny episodes of the show, and it's a must for anyone who has ever been a fan of Bart and Homer and Marge and the gang. I liked the slow bit (an existential crisis, Alaska-style), and I laughed a hell of a lot at the Springfield antics, and I wonder if Lisa's charming Irish boyfriend will be around in season 19 (!) of the TV show come fall. Oh, and if you leave before the closing credits end, you'll miss Maggie speaking her first proper word.

Sunshine. Yes, it's disjointed, derivative, and occasionally downright schizophrenic. But this sci-fi thriller by Danny Boyle (28 Days Later) is more successful at delivering goods than most current films of the genre. A ragtag team of astronauts and scientists are charged with transporting a nuclear payload to reignite a dying sun. And then they stumble upon the missing ship that was sent on the same mission seven years previously. And then it gets scary. I could have done without all the Alien and 2001 homages (or rip-offs, if you like), but the spectacular visuals, wrenching performances, and claustrophobic paranormal suspense make Sunshine essential summer viewing.

Talk to Me. Don Cheadle, as legendary '60s DC ex-con comedian and radio personality Petey Greene, and Chiwetel Ejiofor, as his longsuffering boss and manager, can do no wrong here. The final act could have used more story focus and less cheesy production music, but the film overall is an energetic and highly entertaining biopic that progressively grows more serious and introspective as it explores an offbeat individualist who made a difference and made a mark.

Ghosts of Cité Soleil. The UN has declared Haiti's Cité Soleil "the most dangerous place on earth", and for good reason. Policed by young thugs called Chimères/"Ghosts" (at one time they were employed and armed by then-President Jean Bertrand Aristide to silence his opponents), the Port-au-Prince slum is a constant horror show of poverty and brutality. This brilliantly-rendered documentary about two key ganglords was a SIFF '07 hit and features an original score by Wyclef Jean. It plays Seattle's SIFF Cinema 8/10-16.

Stardust. Studio marketing materials for this zippy fantasy-comedy
(out August 10) hint at it being the next Princess Bride. Well, I've seen it, and it's not that, but it is a wonderfully entertaining movie on its own merits. Brit director Matthew Vaughn leaps well from small intimate crime flick (Layer Cake) to sprawling, big-budget, tongue-in-cheek Hollywood genre movie. And I do mean sprawling: it involves a (human-looking) star fallen to earth, ghosts of dead princes, Peter O'Toole as fixin'-to-die king, a big flying boat, a surfeit of magical objects, and even, um, a unicorn. Claire Danes and Michelle Pfeiffer, two actresses who I can usually take or leave, are remarkably good here as the fallen star and the evil witch who pursues her. In fact, despite some embarrassing attempts at camp by Robert de Niro, most of the performances are great. Luminous, even.