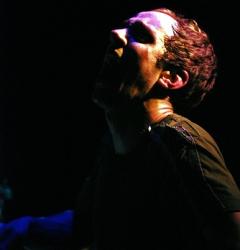 Minus The Bear Homecoming Show

I’m thrilled that I made it to the Showbox early enough to catch The Helio Sequence, the second band on a stellar three-band lineup (I sadly missed openers Grand Archives). I’d been wanting to check out Helio Sequence for a while, and the Portland band absolutely blew me away. How so much sound – perfected and pristine – can come out of two bodies baffles me. The duo expertly blend transcendental, trippy vibes with guitar-driven full-bore rockers, and Brandon Summers’ voice sounded just as brilliant (clean and rugged at once) in the live arena as recorded.

Minus the Bear’s headlining homecoming show was a true testament to this band’s growth over the past couple months. The Bear is headed back out in another week, but for now, “It’s great to be F*%#ing home,” as said singer/guitarist Jake Snider a few songs in to the set. Clearly Seattle was happy to have them back as well.

The crowd soaked up anything the quintet gave them. Up front was a throng of bodies, dancing, bouncing – even crowd surfing—arms extended out toward guitar maestro Dave Knudson, who looked completely in his element, swaying his lanky arms to his own sonic tempo. I’ve been listening to this band in such isolation over the years, somehow thinking that while they surely should be huge, that they somehow weren’t. Boy, was I proved wrong at this sold-out show. The house was diversely packed – the awesomely enthusiastic younger Vera-Project era kids, the requisite hipsters, and even a preppier college pack (this last one surprised me, though I’m happy to see MTB reaching beyond the staid walls of the KEXP crowd). The band even left the stage and returned for a three-song encore—a sure sign of success and of more massive things to come.

During the first few songs, Snider’s voice sounded raspy and road-weary, but he found his signature plaintive, calming timbre and for the rest of the night sounded great. When he traded vocal leads with keyboardist Alex Rose, I had to do a double-take. The two sound so similar, I had to watch who was stretched toward the mic to know who was singing. Throughout, the band was solid. There were a few moments where they didn’t see as tight, but the massive wall of sound—keyboard and guitar blips, wandering bass lines, and full-on rock riffs—made up for any shortcomings.

The band played through most of the newer, guitar-heavy work off Planet of Ice, also including some of the more danceable tracks off Menos El Oso. Particular highlights were the stripped down almost emo-leanings of “Absinthe Party At The Fly Honey Warehouse” (the crowd singing along to “Let’s get a bottle and drink alone tonight” of this early-career track) and crowd favorite “Pachuca Sunrise”—one of the sweetest tour songs ever penned. I was super excited to hear “Get Me Naked 2: The Electric Boogaloo,” though I longed for the female backup vocals provided by Amy Blaschke on the album version. “Lotus,” the prog-rock, sound explosion that was the closer, stunned and left my ears ringing long into the night.