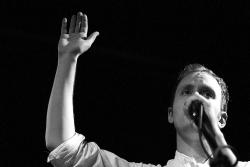 I arrived to Nectar in Fremont in time for a bit of a set of Viktor Sjöberg (the Swedish DJ touring with Jens and also providing backing laptop / electronic accompaniment during the Jens set) and his selections provided a comfy soundtrack for the tightening of the venue.

By the time Throw Me The Statue took the stage, the place was packed to the gills yet the slightly socialist vibe kept folks in check.

TMTS's set started off with a slow song that left me a bit lukewarm. As some may already know, the subtleties of songs without blatant hooks are lost on me. The oceanic sway and furrowed brow of the meandering opener wasn't lost on the bulk of the crowd, however, and by the time TMTS hit the their third song, they hit full stride with both contingents (me and 'the others'). THIS was the Throw Me The Statue I'd been promised: a quintet of blissful guys crafting rollicking fuzzy songs that shimmered with the tinny authenticity of Guided By Voices and the lush wherewithal of a Bruce Springsteen anthem.

Halfway through the set, they turned on the iPod to offer a bass'd out backdrop for "Yucatan Gold," and although the bass was so loud in kinda hurt my insides, this gem of a TMTS song remained a highlight of the set… matched only by their cover of my favorite GBV song ("My Valuable Hunting Knife").

Between sets our neighborly vibe was broken for a bit when it was announced that *someone* had stolen Jens Lekman's merch. Wishes for bad karma for those folks oozed from the crowd. That surely had to be done from someone visiting from out of state, right?

But the bad news didn't dampen the spirits of the band. Shortly after the announcement, the eight-piece took the stage, all donning shy smiles and pristine white uniforms with hand-painted whimsicalities.

It was immediately apparent that Jens Lekman has his stage show down. Stacking the stage with six Swedish females and DJ Viktor and dressing the crew up in white was a striking vision. As they proceeded through the set, Jens’s study at the Jonathan Richman School of Performing Arts was confirmed. The magnetic frontman charismatically led the audience through straight-faced observations of everyday peculiarities in classic Jonathan fashion. He effortlessly augmented the songs’ plotlines with spoken-word intros and mid-song interludes.

Between these well-spun tales, Jens and crew gracefully moved through his catalog with soft landscape with violins, samples, sax, trumpet, accordion and that sweet Dean Martin-era croon to envelop the audience in velvety renditions of old and new favorites. While he played my two favorites ("Maple Leaves" and "Black Cab" — side note: Can you believe he played "Black Cab" so early on — a bold and happy move of making it a fifth song in the set!?!), he loaded the set list with songs from the new release, Night Falls Over Kortedala (including "The Opposite of Hallelujah," "Postcard to Nina," "Sipping the Sweet Nectar," "Shirin" and "Fright Night at the Drive-In Bingo," which he ended the set with).

Even before he and the band left the stage the audience roared in an effort to earn an encore. People had forgotten it was a Tuesday and wanted the evening to last into the wee hours. With the encore came more Jens sweet-talking, a cover of Paul Simon's "You Can Call Me Al" (classed up with the disclaimer "I'm a fan of silly songs, but I never liked the chorus of that song and I never liked Chevy Chase's stupid face") and "Tram #7 to Heaven."

The evening was a high point for the year and further solidified Night Falls Over Kortedala on my best-of list.