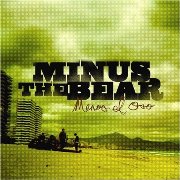 Minus the Bear are growing up. Their latest release, Menos el Oso shows more depth and insight than past releases, requiring more thought, more mental and emotional cognition and response. Where their past release Highly Refined Pirates was boyish and innocent (songs about driving, red wine, pretty girls), Menos is sexy and pensive, with a new sophisticated subtlely.

It's ironic — or, some might say, about time — that the Bear delivers more maturity. After all, this is a band whose members are all approaching (or into) their 30s, but who up until now consistently proffered song names and off-stage antics of teenagers. ("I'm Totally Not Down With Rob's Alien" and "Thanks For the Killer Game of Crisco Twister" are typical of their signature wacky, wordy titles.)

Maybe that's what is giving me pause about this record: they're growing up. As a long-time Bear fan, this naturally forces the realization that I'm growing up. What Menos El Oso provides is a soundtrack to the Saturn Return phase in life; growing older and supposedly wiser while all the while longing to return to the roots of who we were as naïve, un-tainted kids. Minus the Bear still, as they did from their first release, tangle their groovy dance beats (Erin Tate on drums, Cory Murchy on bass) with guitar licks (Dave Knudson and Jake Snider) and poignant, wistful vocals (Snider). Now they're doing all that but with a wiser, more worldly view behind them.

Opening track "The Game Needed Me" is the epitome of that aging sentiment. "What does it cost for/ this life of excess?/ Would you ever miss your desk's caress?" Coupled with its brooding, spacey guitars and feedback screeches, it's clear we're in more serious waters. The dark, minor chord mood continues into track two, "Memphis & 53rd."

"Pachuca Sunrise" is, perhaps, the strongest track. A tour-weary love letter from across the Atlantic, it tugs at the heart strings in lyrical content but nudges your feet to move, your body to sway to its undeniably tight and dancey rhythm that kills. With Matt Bayles behind the control room window (and behind the keyboards), the album's sound is pristine.

No worries, even with the more seasoned, more around-the-block slant on Menos, I suspect there's still a heavy dash of mayhem on the side. You can't grow up all at once, after all.