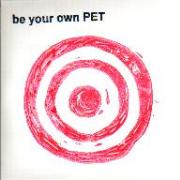 Be Your Own Pet

As a general rule of thumb, it's a good idea to have a healthy amount of skepticism about bands comprised of high school kids who make it big. All too often there are too many svengali parents with broken rock dreams of their own lurking behind the scenes or record execs pushing the gimmick of a Muppet Babies version of whatever is the hot trend of the moment (What the hell ever happened to Silverchair, anyway?) for there to be any genuine youthful piss and vinegar in the music.

So, with that caveat out of the way — and discounting the fact that, yes, they are from Nashville (one of the capitols, along with our own fair city, of broken musical dreams) and yes, apparently all their parents are involved with the music business, and the fact that, yes, a casual listen could kinda, sorta, peg them as a Lil' Yeah Yeah Yeahs — one still has to come to the conclusion that Be Your Own Pet is pretty damn bad ass.

A four-piece of 16 and 17 year olds from the aforementioned Music City, BYOP has a fun, slightly southern-fried take on the whole YYYs / Strokes kinda indie, kinda catchy, kinda punky New York thing. The title track of this three song EP is genuine ear candy in the best sense of the term, and I dare anybody to get it out of your head for at least a few days after you hear it.

If anything about BYOP assuages my mild reservations about kiddie bands on major labels, it's the fact that they honestly just sound like a really good band of teenagers. Singer Jemina Pearl has got a lot of sass and sneer, and her voice sounds like something that will probably bloom into something really special. But here she sounds like a 16 year old punky-waver girl singing in a band with her buddies — which is not any kind of put-down; it's one of the things about the group that makes them endearing. Definitely worth grabbing this EP and we'll wait and see on a full length.