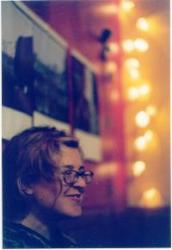 Simple melodies with uncomplicated mono-syllabic lyrics are what come to mind with the term "children's music." However, Spectratone International evidently had a different idea when they created music for the Seattle International Children's Festival. The quartet, led by prolific cellist Lori Goldston, composed a 12-song set to perform at the festival which showcased their talents and the poetry of scientist Jean Henri Fabre, bringing in the talent of local songstress Mirah. While music for the littler crowd isn't their usual forte, having kids of their own and personally knowing the organizers of the festival led to the project for Spectratone. The set, titled "Share This Place," incorporated a stop animation film illustrating the song's subjects-insects.

On the evening of Friday May 18th, the show was presented at the Vera Project, sans the film, and the crowd was filled with older children-adults and teenagers, in fact. Apparently misleading advertisements declaring Mirah as the headliner led to a general misunderstanding that she would be performing as herself. Yet, when the announcement was made she was actually a guest for Spectratone and that they would be performing children's songs, the crowd was not deterred. And fortunately for us concert attendees, the music was not like aforementioned stereotypical children's music. Instead, the music was more like a familiar Danny Elfman score from a Tim Burton film.

All four musicians (Lori Goldston on cello, Kyle Hanson on accordion, Kane Mathis on oud, and Jane Hall on percussion) are definitely artisans of their instruments and played an extremely tight set. With drops into solos and wide dynamics, their unplugged music bordered on post-folk with an avant-garde feel which incorporated European sounds. The choice for Mirah as singer was a very wise one, as her singing style is already like a lullaby with soft vocal delivery and pure, youthful tones. Thus with children as the target audience, her voice was a perfect match. Yet for the less juvenile in the Vera crowd, the maturity Mirah's talent contains deflected feeling talked down to; It didn't seem like you were listening to a children's song. The lyrics were extremely eloquent and so completely articulate about insects, I left feeling more educated. As a nearby attendee asked, "How were children following along to these songs?" Indeed, these were definitely smart songs for smart kids, and the CD is set to be released by K records later this year.

Show opener Kimya Dawson, who frequently shares a stage with Mirah, joined in on the fun playing some children songs of her own. Her set was comprised of songs of recent release Alphabutt, and of course true to Kimya's style contained witty lyricism over top of her simple acoustic guitar riffs. The title track, for example, was a clever play on the classic alphabet song with letters meaning such things as "f is for fart", "g is for giant mommy fart", and several poop references. Actually, most of the songs included at least one mention of poop, which of course is a big topic in the realm of babies. A personal song about being pregnant with her now 10-month old daughter Panda was the most endearing; however, even more so was the fact baby and Kimya's husband were in the crowd for the show. Panda seems to be heading in her mother's footsteps, as she debuted her own vocal cords between songs. This was the last chance to see Kimya for the local crowd, as she's set to travel Europe for the next two months on a tour and vacation.

Although I entered as one of those who mistook the advertising of the show, I was not disappointed in the sets or the fact they were for "children". If I were a parent myself, I would choose Spectratone International featuring Mirah or Kimya Dawson's work over Radio Disney for my children any day.