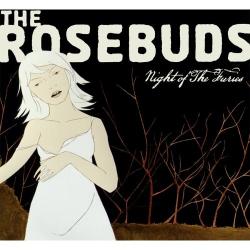 Night of the Furies

The easiest thing to say about the new Rosebuds album is that it sounds like (insert your favorite 80’s new wave band here). On first listen, it sounds like the type of music you’d expect to be piped into the Gap. Hip sounding but noting to disrupt your interaction with the new straight-legged khakis.

Night of the Furies is the third album from North Carolina’s husband and wife duo Ivan Howard and Kelly Crisp. Their first album, Make Out is an unapologetic indie-pop romp about, well, making out and other such delights. Terribly fun to listen to, but not terribly memorable. Their second album, Birds Make Good Neighbors regarded as a move in the wrong direction my many, was much more moody and much less fun. With The Furies, the Rosebuds bring back the fun, but at the expense of developing a distinctive voice of their own. Ultimately, this album suffers from catchiness that is mostly derived from songs you already know.

Fans of 90’s era New Order should enjoy “My Punishment for Fighting”. Moving forward to “Cemetery Lawn” provides the listener with a synth string arrangement n that could pass as a missing track from any Wish-area Cure album. “I Better Run” should be a hit with folks who can’t get enough Pet Shop Boys. You get the idea.

Despite the all-too easy comparisons to be made to other artists, there are some very enjoyable elements to Night of the Furies. The Rosebuds bring depth to the album with their uncanny capacity for mixing utterly danceable beats with lyrics dripping with loss and longing. This is perhaps best exemplified with the track “Hold On To This Coat”, where Howard laments; “our choices brought the winter to our home.”

Conversely, “Silja Line” is perhaps the most interesting and least danceable track on this album. It’s slowly building to a sea-shanty chant of vocals shows a glimmer of the potential of the Rosebuds. While the best album by The Rosebuds may still lay ahead, Night of the Furies hints at good things to come once they hit their stride.