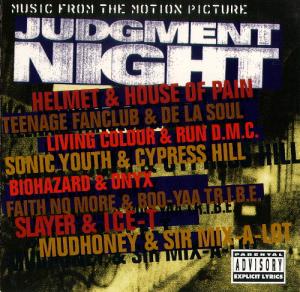 If you've ever wanted to hear a song that both (a) was waaaay ahead of its time and (b) was never appreciated at the time, especially by, well, me, this is it. There is an awful lot on the soundtrack to the abomination that is Judgement Night (you know, where Emilio Estevez, Cuba Gooding Jr., Jeremy Piven and Stephen Dorff rent an RV to go to a fight and end up fighting Denis Leary on the streets – looking at this cast now makes me wonder how this movie could have been as bad as it is) that was under-appreciated to begin with considering it tried the whole "oh boy, you got hip-hop in my rock/you got rock in my hip-hop formula" for the first time (at least on a major release). You could enjoy songs by the likes of De La Soul with Teenage Fanclub, Faith No More with the Boo-Yaa T.R.I.B.E. (a Samoan rap group!), Cypress Hill with Sonic Youth, Helmet and House of Pain among many others. At the time, I was young and foolish, I didn't really pay attention to the Dinosaur Jr. contribution to the compilation, but in retrospect, it blows the rest out of the water (with the possible exception of the De La Soul/Teenage Fanclub "Fallin'"). What we have here is a song that could be released today and still be a hit – except that it was never a hit at any time. Del is about as smooth with his verse as ever and J Mascis just sort of drifts around with his guitar, – almost like that Del was designed to perform with Dinosaur Jr. The perfect fit that was never tried on is what we're looking at here. "Missing Link" began it's life on my iPod as an afterthought, something I put on there because I was trying to be complete and probably thought "well, I like Deltron, maybe I'll give this song another try." Little did I know it would come up on shuffle at some point when the stars were aligned appropriately and my head was ready for it and since that singular moment, it is one of the few songs that I will not skip. That is one of the joys of having an iPod packed with long forgotten or never remembered songs – they can have a second, third, fifteenth life when they arrive on random, as if they've been on vacation getting refreshed and now they're ready to jump back at you revitalized. "Missing Link" is just what the name implies and then some … how I all missed it in the first place is beyond me.