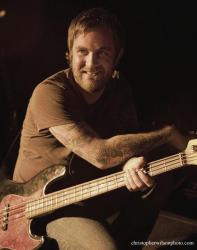 Band of Horses Bring It All Back Home

The homecoming show of former Seattle band Band of Horses at the Showbox came on the heels of their announcement that they had just wrapped up recording of their sophomore album. This provided added anticipation and excitement for this date as they would undoubtedly play a mix of tunes from Everything All the Time as well as the yet to be titled follow up record.

But first there were the opening acts highlighted by Band of Horses new neighbors from Charleston, SC: A Decent Animal. They were a good fit for a Band of Horses opening act, featuring well-crafted, catchy songs by a well-practiced band. All of there songs were tight and they put on a great show that was much more than I had expected. I bought both of the CD’s they had for a grand total of $10, a solid investment.

Band of Horses took the stage amid a huge cloud of fog and smiles all around, as if to say, “this fog machine is ridiculous, how rock star are we?” and opened with what Ben Birdwell announced was the first track off the new record. We’ll call it “Ghost in My House,” as that was the chorus of this new track. It was more up-tempo than anything from EAtH and was kind of weird coming from BOH, but as the song progressed it grew on me and I’ll be anxious to see how it comes through on the album. After this new track Band of Horses went to the bread and butter from their debut, playing “The Great Salt Lake” and “Weed Party” in succession. At this point I remembered why Band of Horses are such a big deal. It’s not because they're local; it’s not because they’ve spawned a burger joint, a bar, and a separate band altogether; it’s because they’re really, really good.

More fog filled the air as the show went on and the band played eight of the ten songs off Everything All the Time and mixed in four new songs (possibly five, but I think the final encore may have been a cover?). The new songs were all a little different from the material on EAtT and it’ll be interesting to see how they mesh together when the album is released. One track I swore I’d heard before — it may have been performed at their last Seattle show — sounded a little like a Tom Petty song. Another new track had just a bit of a Built to Spill vibe to it and I noticed producer extraordinaire Phil Ek nodding along more exuberantly this track than most of the others. The final two new tracks (or one and a cover) were almost rockabilly, quick tempo’d raucous country roadhouse numbers that closed out the night with a vigor.

I came into this show with low expectations and left with a renewed appreciation for Band of Horses. They were clearly having fun at their homecoming show, with Ben asking about the score of the days Mariners game (they lost) and lamenting about the recent departure of manager Mike Hargrove while sporting a cheesy tourist style hat with “Seattle” written across the brim. The show was full of energy and smiles all around, and there was a sense of real appreciation from the band.

Despite what you may have heard, Band of Horses proved last Monday that sometimes, you really can go home again.