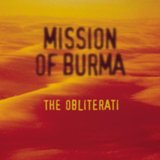 Growing up in the early 1990's of Boston there were a few bands that everyone knew (well, at least everyone that was cool). There were the Mighty Mighty Bosstones, the Lemonheads, the Pixies and the granddaddy of them all, Mission of Burma. In those heady days, there were commercial stations that would play that kind of stuff (WFNX, which still exists as a husk of its former self) and I remember sitting in the basement of my parents with an old, grey stereo listening to "That's When I Reach for My Revolver" cascade out of the speakers. The song had a primal urgency that most songs lacked with raw, unhewn edges of guitars, driving bass and rolling drums that combine into a pure post-punk symphony. Mission of Burma has always stood out in my mind with those bands of my youth (along with the likes of Galaxie 500, Kraftwerk and the Clash) that were like the titans of music, long since vanished from this plane of existence but still exerting their influences on music. So, when Mission of Burma made their 2004 comeback with onOFFon, I was some ambivalent to though whole venture at first. Were these not the long defunct punks that vanished into the Bay State ether? Is this just another attempt to dust off the moniker to make some money off of the nostalgic Generation X'ers? Would my memories of the band be forever sullied by the return of the prodigal sons of Boston rock? Luckily, unlike other comebacks that flamed into a disaster (e.g., Stone Roses, Sex Pistols among others), onOFFon was an excellent album that lost none of the edge of the last Mission of Burma album that was released a mere 22 years earlier.

Here we are, two years later, and Mission of Burma have followed up onOFFon with The Oblierati eleven times faster than they followed up Vs.. Lo-and-behold, they keep heading up. The album is tighter, more refined and captivating than their comeback disc. They charge out of the gates with "2wice," as thunderous as anything out there today and sounds like the sonic progression of onOFFon's "Wounded World". It has an incredibly catchy chorus that somehow combines thundering drums and thrashing guitars with backing vocals singing la la la. As is with most of Mission of Burma's songs, the wall of sound that the listener is hit with can be overwhelming to the uninitiated, with Roger Miller's guitar and Clint Conley's bass taking no prisoners, like on "Spider's Web". The sound they produce is unrelenting, almost leaving the listener feeling like they're being attacked from all sides. Even if they try to fool us with a slow buildup as on "Donna Sumeria," it is always punctuated by convulsions of sound. The term "ballad" does not exist in Mission of Burma's vocabulary.

All of this chatter about noise is not to say that Mission of Burma is in any way atonal. On the contrary, unlike other bands (who will rename nameless) that mistake being noisy with lacking any melody, Mission of Burma is always rooted in a clear melody. On "1001 Pleasant Dreams", the guitar criss-crossing the opening as the drums march in, but as the bass kicks in, the song is always dominated by a musicality, albeit one that could kick the teeth out of mule. The same can be said for "Careening with Conviction," which pounds along while also having some complex counter melodies in the vocals and a downright pretty (yet aggressive) bridge. If anything, it's the perfect archetype of the Mission of Burma formula.

The closest we get to a slow song might be "13" that sounds as if it's the soundtrack to a treacherous fishing journey from Gloucester (OK, maybe projecting a bit of New England here). There is an emptiness and loneliness that is balanced by an unrelenting dread, like the waves of the ocean crashing around a lone fishing vessel. "Is This Where?" has a gentle beginning that evolves into a caustic chorus of is this where I'm supposed to cry?. They close out with the vaguely humorous "Nancy Reagan's Head" where they sing I'm haunted by the freakish size of Nancy Reagan's head/no way that thing came with that body. They almost seem ready to indict the music scene that spawned the band when they add Roxy Music came to save the world/and all I got with this lousy t-shirt, and at times, you have to agree with them.

Mission of Burma are one of those rare bands that seem to be able to skip twenty years of rock and roll, return and sound as new and exciting as ever. They were the godfathers of an entire genre of post-punk band like Fugazi, …And You Will Know of From the Trail of Dead, Cap'n Jazz among many other. The Oblierati continues to add to the impressive, though brief, oeuvre of a band that deserves much more praise than it receives. Luckily for us, they decided they had more to add to the legend.