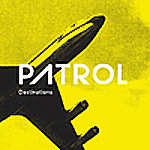 It'd be pointless to rehash the bloated Hollywood fantasies from the early to mid 90s about "The Seattle Scene" but it's a fact that it had been years since there was solid non-fluff guitar rock on mainstream radio. I never had a problem with the music of that era per se (The Nirvana was aight tho) but the vocals were un-listenable. That highly emulated Veder Yarl is like fingers on a chalkboard. Oh well, I guess it was the heroin (or the image of it anyway). Fortunately for us locals, Patrol has hit the scene with the big guitars and the vocals don't sound like someone trying to sing with a tongue full of Novocain (just watch the pronunciations on those words "you" and "destinations".)

I'll avoid the lazy comparisons because Patrol is just too good a band to be pigeonholed. But to at least give an approximation, if you're down for mid 70s classic rock and psychedelia, a tastefully moderate dose of nineties alternative-ish guitar rock (I'll avoid the G-word and it's OK to admit that some of it was in fact good) and quirky art rock released by the likes of Touch and Go and Quarterstick Records, then you're likely to appreciate Patrol. They're musically challenging in a time-change-acrobatics kind of way but they're committed to riffs and melody unlike their noodle-ey art and math rock counterparts ala the abovementioned Chicago based indies. And they're not into guitar solos thank The Lord.

The genre approximation that Patrol is undertaking is not flawlessly executed but this often works in their favor. The ebb and flow of the tempos of non machine-like clockwork can be a good thing so that it actually sounds like human beings playing music together unlike a band like, say Tool. So hopefully Patrol won't ever feel the need to spend months in the studio to achieve a "perfect" sounding recording. Producer Matt Bayles (Botch, Murder City Devils, Isis, Minus the Bear) does a good job in capturing what the band really sounds like without over polishing. One unfortunate detail in the mix though is that Jake Reisenbichler's bass tone doesn't always cut through as clearly as it ought to.

Patrol's arrangements feel a tad rushed sometimes and this can get in the way of the music sounding heavy. Or what I perceive is supposed to sound heavy. I once read heaviness likened to the sound of a big rock being dropped into water — You hear the initial plunk, there's a pause and then the splash. But harnessing weightiness isn't qualified by volume or a sluggish tempo, it's a feel. It's hard to describe but decipherable when performed confidently. Though John Bonham will never be blamed for drumming subtlety, the dude laid it down heavy and steady as a freight train while simultaneously playing barely behind the beat. This isn't a gripe about drummer Eric Jung at all cause he's actually made leaps and bounds in his playing from his days in local prog band Vermillion. It's really a band communication thing.

It could be that Patrol needs to be using minimalism to their advantage. This could probably be accomplished by clearing away the unnecessary clutter of complicated riffs or huge drum fills. Page Hamilton from the nineties rock band Helmet said in an interview once that if the opening for Behthoven's 5th didn't have that big open space in that sinister descent (you know da-da-da-da—long rest—da-da-da-da vs. da-da-da-da-da-da-da-da) it wouldn't have been musically effective or memorable. I'm paraphrasing of course but Hamilton and company took that compositional lesson to heart because they were masters of creating open space so that riffs could breathe.

Patrol is a really great band that needs to be heard. But what would push them over the top into ultimate wickedawesomeness would be economy of song arrangement. I don't mind epic, long songs once in a while but these tunes are well crafted melodically so that the main body of the songs stand well on their own. I say less is more. Hit 'em between the eyes with an infectious riff, back it up with solid vocal melody and you've got a winner. Patrol nails it most of the time but could still stand just a smidge of self editing.

There are a few rev-up mid sections in several of the songs (that kind of remind me of the midsection jams in early Black Sabbath songs) like in "Bropal" and "Relax". This is generally where the guitar interplay of Doug Lorig—who also doubles as the vocalist—and Skippy King heads off into discordant territory by building up the tension and tempo to resolve again into the main riff. It could be that the band was thinking that they didn't want a slower song like "Carve" to lag but the rev-up actually detracts from the overall strength of an otherwise stellar song. This buildup theory is actually executed really well though in the song "Our Compromise" which aesthetically has the same airy and open quality as "Carve".

Patrol haven't reinvented rock with "Destinations" but they have expertly extracted all the good stuff from the abovementioned points of reference and have turned it into something really ass kicking without being schlocky, melodic without sounding like they're forcing different styles and smart without being pretentious. Hell, I've been rocking this disc non-stop since the day I got it in the mail. (and some American label needs to pick this up dammit! It's a Japanese release only so far!) I couldn't be more pleased that there's a rock band that is pulling off something so guitar-centric without the cheese.

No, Patrol isn't on the cute band alert and they're not particularly snappy dressers. So all you summer sweater, girl-jean wearing waifi-ish scene boys (and girls) with 80s fetishes can hang up the ironic rock T-shirt collections and go back to the fashionista scene policing from whence you came. You look better at the back of the bar anyway. As for me, when Patrol is playing another shitty midweek show (with a mere forty or so people in attendance mingling around wondering if Pitchfork Media would approve) I'll be front and center with both fists pumping in the air.