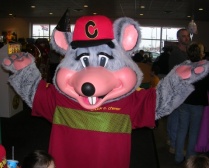 Cops broke up a veritable melee last weekend after a rowdy group of teen girls went berserk in a Mississippi Chuck E. Cheese.

Highlights from this colorfully-worded article tell the shameful tale:

But Saturday night, adult bystanders and Gulfport cops were needed to break up a melee when a rowdy group of more than a dozen teenage girls went berserk in the restaurant's lobby, police said.

Witnesses said the fight erupted with two potty-mouth girls exchanging wild haymakers near the front entrance and ended with several of the bunch tangled in a hair-yanking, face-scratching nest of rage.

Earlier that night a miffed customer complained to Chuck E. Cheese employees – known as "cast members" – that the girls were hogging the photo both, dropping f-bombs and posing thuggishly to snap pictures of themselves shooting the bird, said customers.

Later, the teens played chase around the restaurant, knocking toddlers over and sending panicked children cowering behind their moms, witnesses said.