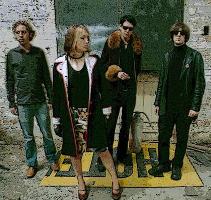 Sure it may not be a surprise that when asked, the members of the Manhattan Love Suicides mention the words "Psychocandy," "Jim Reid," and "Lou Reed" — but it is interesting to find out they have a taste for Guinness and espresso (you know, when they want to take things up a notch on the feedback scale).

Thanks to interviewer Dave Crane of BOAT for taking a few moments to connect with the Manhattan Love Suicides. This UK band will be joining him at the Three Imaginary Girls' SXSW showcase at Lovejoy's in Austin, TX on March 15, 2007 (along with Tullycraft, BOAT, The Faintest Ideas, The Zebras and Palomar). Although they may not play for a substantial amount of time, they will certainly stun us with their beautiful fuzzy anthems.

{imaginary aside: if you want to hear what all these folks sound like, listen to the imaginary SXSW podcast which serves as of a sampler of these bands.}

As Winston Churchill once said, "Attitude is a little thing that makes a big difference." Let's see what his younger countrymen and woman had to say…

How long have you been a band?

Darren: In February last year, we were still only a three-piece band really. Eddy wasn't a permanent member and just helped out from time to time, which is why I play some of the drums on the album. So, I'd say as a complete band we've only been together around one year.

Have you ever played outside of Europe?

Caroline: No. We did a gig in Amsterdam which was really an excuse for a band wild weekend – and it was. I'm really looking forward to the forthcoming shows. I've been to New York before but only as a tourist. I'm interested to see what goes on in Texas of an evening.

Darren: So am I. I've heard good things about SXSW – and to play in New York, which is one of my favourite cities, is fantastic.

I hear you play really short sets… how long do you plan on playing at SXSW?

Darren: I don't like long sets. 99% of all the bands I've ever seen could cut the length of their shows in half if they didn't talk between songs as much, or spent time tuning up and changing instruments. Our set is likely to be around 20 minutes. We've added a few more songs now so it lasts slightly longer than the 10 minutes we used to play for.

Caroline: We usually play 10 minute sets, but as we're travelling such a long way we're thinking about doing an out of character set of between 12 and 14 minutes long.

If you were to add one famous member to your band… who would it be and why?

Caroline: Jim Reid. Not a muso and just enough ego. We could do a great duet.

Darren: Well, that's what I was going to say. For anyone else you'd have to get in a time machine. I'd say Lou Reed circa 1966, but even though I love his guitar sound in the Velvet Underground, I can bet he was an egomaniac and difficult to work with.

Adam: Wilhelm Reich. I think he'd be a fun guy to have around. We could teach him to play the guitar. Or musically, probably Julian Cope – but without the 20 minute guitar solos obviously.

What are you most looking forward to at Austin?

Caroline: Mary Weiss and The Stooges… if I can possibly get in to see them. Also, I see one bar sells Guiness with espresso coffee in it which sounds really good.

If each member of the band had to choose one album to listen to on repeat for the whole plane ride from the UK to the USA, what would it be?

Darren: Probably Galaxie 500 On Fire. Not one bad track on the whole of that album. The Velvet Underground and Nico and Psychocandy are my favourite albums, but I've heard them plenty of times already.

Adam: I haven't got an IPOD so I'll be reading instead… The Illuminatus Trilogy.

Caroline: It's a very long journey involving three flight changes, so it has to be a very special album. I'd go for Make Way For The Ronettes. A great girl group.That's what I'm really into at the moment.