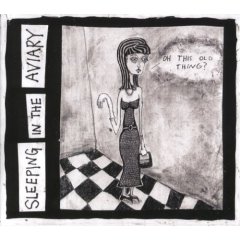 In fewer than 25 minutes, Sleeping in the Aviary's Oh, This Old Thing? establishes the band as a viable contender for the Next Big Indie Thing. The Madison, Wisconsin trio's Science of Sound debut is flat out exciting — like riding the Gravitron at the carnival (minus the subsequent urge to vomit). The sound is at times reminiscent of bands like The Libertines and The Vines, filled with driving rock 'n' roll but also offering moments of delightful pop melodies ("Gloworm") or Art Brut-style calamity ("Maureen").

The one-two punch of openers "Face Lift Floats" and "Pop Song" is brilliant. The former perfectly launches the album's raucous lo-fi pop-punk pulse, and then with hardly a breath the latter kicks in, complete with hand claps, do-dos, yeahs, etc. "Another Girl" follows, still maintaining the velocity while toning down the pop, only to be re-initiated with "Gloworm," which winds down to nicely segue into the first ballad, "Sign My Cast" — a magnificently strong song where singer/guitarist/main songwriter Elliott Kozel's gut-wrenching delivery of the lyrics, "Is it safe to touch your broken arm" make you sorta almost start to choke up a little. But then comes "Maureen," one of two songs penned by bassist, in which the only lyrics, "Maureen doesn't like me anymore!" are repeated eight times in a fast-moving high-pitched wail.

"Drug Suitcase" is great fun, with a chorus of "Oh, your body's nice but your mind is a joke" that gets stuck in your head (I mean, who can't relate?). By this point, Elliott has fully sold you on his mastery of the punk vocalist technique. Next comes "No Socks," the second track penned by Phil, the raucous "Only Son," and the poppy "Lanugo," which would serve well as a lead single thanks to its terrific versatility — as much as it is pop (with bops and ba-da-da-das), it also continues the lo-fi rock vibe. "Love Song" follows in another instance of perfect song pairing; the equal-parts pop-punk/lo-fi-rock/emo ballad is one of the album's strongest numbers due to its sheer genre-bending ingenuity. "Getting Thin" brings it all to a climactic near-finish, culminating in a crashing, screaming frenzy that reverts back to quiet-ish for a moment before loudening up again with the lyrics "I'm a doctor trust me trust me trust me!"

The untitled final track, appearing after a brief pause, is a stripped down version of "Pop Song" with only vocals and piano, with an echo as if the recording was done in a cavernous space. It's a lovely rendition that serves well as the album's tranquil signoff, like stretches after a vigorous workout.

Effects and feedback turn up here and there, giving the vocals an occasional Strokes-like muffle or jarring the guitars. Not to be outdone, drummer Michael [last name unknown] provides a solid and inspired beat throughout the stellar album, freshly placing beats and drumrolls where you don't expect them. This is one of those bands whose recorded sound is so thrilling, one can only imagine what kind of high-octane live show they're capable of pulling off. Lucky for us they're on tour throughout most of the U.S. this spring. [Um, guys, could you come to Boston please?]