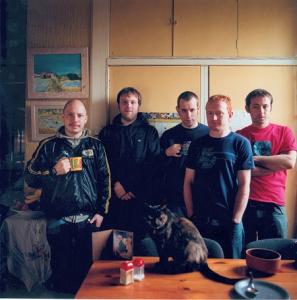 The last time I saw Mogwai, I almost lost my left foot. No joke. That was probably the best Mogwai show I've ever seen, and that's saying something. I've seen them play 16 or 17 times now. Also no joke. Ask anyone; I'm the most ridiculous, embarrassing, drooling Mogwai fan on the planet, and I'll totally fight anyone who challenges me on that point.

I found Mogwai at a time in my life when things seemed pretty bleak. I was in a zombied-out fog and was unable to feel much of anything. Enter Mogwai. The first time I saw them play live, I was totally blown away. The only Mogwai album I owned at that time was EP+2, which is a pretty mellow recording in my opinion, so I wasn't expecting the full-on audio onslaught I experienced. My blood began to pump again. I began to live life on a steady diet of Mogwai. The music became a substitute for my heartbeat. It kept me upright. It was as if I was teetering on the edge of a cliff, Mogwai playing on the ground far below. When I let myself go over the edge, the volume and ferociousness of the music kept me afloat and then gently brought me back down to earth. I owe a lot to Mogwai. They helped bring me back to life.

Don't ask me about the first time I met Stuart Braithwaite. I think it's often better to never meet your musical idols. It was easily one of the worst and most humiliating nights of my life, although I can laugh about it now. I've since met most members of the band on a few occasions and managed to maintain a little more dignity than that first time.

For the next nine years, I proceeded to collect as much Mogwai-related crap I could get my hands on. eBay became my best friend. I own rare 7-inch splits on colored vinyl, "number 1" album pressings, press kits, out-of-print tour singles, autographed set lists, videotaped shows I can't even watch because they were in the European PAL format, Mogwai commemorative earplugs. I toyed with they idea of buying the drummer's pacemaker when it was for sale on eBay. I have the Mogwai Young Team logo tattooed on my neck. I've made lasting friendships with people all over the world that were based on our love for Mogwai. I've traveled to four different states and three different countries to see them play.

Enter the story of my left foot. I went to see Mogwai play at the Connect Festival outside of their home town of Glasgow. A small cut on my foot on the first day of the festival turned into the most gnarly staph infection you've ever seen. I thought it was just a really bad blister but it proceeded to grow larger and more painfully infected. Still, I waited until after seeing what was easily the best Mogwai show I've ever seen before getting medical attention. I had to be taken out of the festival in an ambulance. Shut up.

I used to be able to easily rattle off any of their obscure song titles, the album each song was on, the year it was recorded. I devoured all Mogwai news and monitored their website and the BrightLight! bulletin board regularly. In short, If Mogwai took a crap, I knew about it. But in recent years, my fanatacism has cooled somewhat. Not because the band has changed, but because I have changed. I've long since given up on the childish dream of getting married to any of the band members (well, almost) or on writing a film specifically for them to score. I don't have a fervent need to own every tiny piece of flotsam that floats past.

I still love Mogwai. I love what they've become. I love that they alone have spawned a genre of music that now includes Explosions in the Sky, Mono, Lebanon, This Will Destroy You, Kinski and countless others. I love that they continue to create (the new album comes out on 9/23/08) and collaborate with various artists. I'll continue to keep an eye on their careers and various side projects. But I don't think I need to lose a limb anymore to prove my love. They don't need it either.

{Heather just saw Mogwai again in Seattle. The review is coming soon. We can confirm no limbs were lost at the show.}