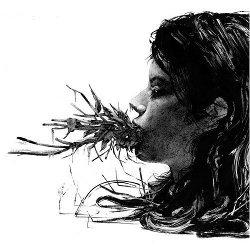 After three years in the planning and created in two months of breathless, obsessive thickening, involving near twenty-five classically trained and experimental musicians, toggled between Seattle, WA and the Parenthetical Girls' home-base of Portland, Oregon, their third album Entanglements is boisterously, melodramatically ambitious.

Repeated listening — OK, breathless, obsessive listening — has proven that its linguistic acrobatics and near-supernatural emotional metonymy is worthy of its emulous goals. Entanglements may be called fey by mooks and fools, but it is not for the faint of heart.

This is the first PG album that I have experienced — up until now I'd only seen them live only once, and only heard bits of their debut (((GRRRLS))) and the attention-grabbing 2006 release Safe As Houses. Entanglements was intended to follow up their first record, but the ideas that founder Zac Pennington and his occasional collaborators were coming up with, based on visions of a highly conceptual orchestral scale, required such adhesion that the cycle was set aside until Pennington could fully articulate them.

Pennington brought together a core of musicians — starting with longtime producer, engineer, and co-conspirator Jherek Bischoff of The Dead Science, adding multi-instrumentalists Rachael Jensen, Eddy Crichton, and the reportedly extremely versatile Matt Carlson — who help Pennington create an effervescent tapestry of song and sound for this third record.

This release does more than dabble in pretentious rock chamber-pop, using strings to evoke moods that normally transcend the normal alternative rock music fan's emotional base; Entanglements comes off as exciting as maybe the first time you heard The Smiths, but much scarier and challenging; I would rather liken it to the personal discovery of the Velvet Underground, when an open mind is enraptured by what real art-song lyrics and music can be when crafted and performed for those who have grown up in the silhouettes of Burroughs, the Beatles, and the bomb.

Pennington's brave and beautiful falsetto drives the scabrous and perturbing imagery of "Young Eucharists" and "GUT Symmetries" to seem as transgressive as "Venus in Furs" or "What Difference Does It Make?" but with the most epicurean and voluptuous string-led parlor room music you can imagine to accompany them.

The Parenthetical Girls and their album Entanglements is (perhaps gleefully) not for everybody. It was probably planned that way, but part of me thinks it should be out there written about in every magazine and on every website, its abject honesty and boldness like an afflatus, a wind from everywhere.

However, a practical warning would be that it is not for fans of the guitars, bass, and drums archetype. This is, to be honest, probably nowhere near rock and roll (though like a tall glass of pernod it rocks for me!). People might consider it precious and scholastic, but to me it feels like a bracing, invigorating change of pace from the norm.

If you'd rather your luxurious violent femme rhapsodies be more fashionable Xiu Xiu Kenneth Anger-rock-based or full-throttle blood-thirsty apeshit Dead Science style (Zac is also joined here by Sam Mickens from that band as well) Entanglements might be too literary for you. I would beg the listener who is bored with bands not taking things far enough, not saying a little too much, not ever revealing the transvaluation of all values through masterful musical persuasiveness to throw in with me and recurrently enjoy what might be my favorite record of the year.